(Brasilia) Do Luis Angotti Wilson Filho made the worst start possible start as he takes over his diocese.  During Communion he asked kneeling faithful to stand up. Fratres in Unum criticized the behavior of the new bishop as "outrageous behavior" criticized Frates in Unum the new bishop.
On June 13, the inauguration of the new Bishop of Taubaté in Brazil took place. Pope Francis had appointed  Dom Luís Angotti Wilson Filho last April 15th  as the new bishop of the southern Brazilian diocese. Taubaté is a suffragan of the Archdiocese of Aparecida. It was established in 1908 by Pope Pius X by making territorial concessions to the Archdioese of Sao Paulo. As Pius XII. established the Archdiocese of Aparecida in 1958, the reduced diocese of Taubaté became the new archdiocese.

"Your Excellency, are You not Ashamed?"

A native of the State of Sao Paulo Dom Wilson was conferred ordination in 1982. In 2011 Pope Benedict XVI appointed him as Auxiliary Bishop of the Archdiocese of Belo Horizonte in the State of  Minas Gerais and Titular Bishop of Tabae, a defunct diocese in southwestern Turkey today.
As for the faithful who knelt for Communion at the inauguration last Saturday, they were "shamelessly" asked by their new bishop, said Fratres in Unum , to stand up and receive Hand Communion. "Excellency, are you not ashamed to begin your episcopal ministry in this historic diocese by such an embarrassing disregard of the law of the Church, which assures the faithful that right?" The Canon Law explicitly provides oral communion as the full and actual form of the reception of Communion while Communion in the hand had been authorized only in the post-conciliar period as an exception.

As Cardinal Baldisseri Was Apostolic Nuncio in Brazil 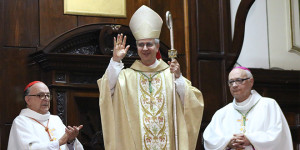 Dom Wilson at his inauguration
The Spanish church historian and well-known Catholic blogger Francisco Fernandez de la Cigoña described the new bishop for his handling of the believers, in its direct and colorful language, as "Chulo de mierda". "If the bishop does not respect the faithful, why should the faithful respect their bishop? I am not subject fortunately, to this idiot and therefore am without fear of his shepherd's crook to say what I think," said de la Cigoña.
The appointment of Dom Luís Angotti Wilson Filho auxiliary bishop of Belo Horizonte took place, when Msgr. Lorenzo Baldisseri was Apostolic Nuncio in Brazil. Pope Francis named Baldisseri in September 2013, Secretary-General of the Synod of Bishops and raised him in February 2014 to the cardinal state. At the Extraordinary Synod of Bishops last October, he played an inglorious role.
In 2013 there was another Brazilian Bishop, Archbishop Milton Antonio dos Santos of Cuiabá, who did not allow the  faithful of his diocese to kneel for communion  in a magisterial statement. After violent protests of the faithful, the Archbishop backed down and took back the ban (see Liturgy scandal before Pope's visit to Brazil - Archbishop Wanted Kneeling Communion Ban in German).
Text: Giuseppe Nardi
Image: La Torre de la Cigüeña
Trans: Tancred vekron99@hotmail.com
Link to Katholisches...
AMDG
Posted by Tancred at 5:12 AM

Pope Francis is a disaster.

The photograph shows his apostasy. No non-apostate priest would dress and pose like this.

He is an enemy of Our Lord and His Holy Church. They are effectively in control of the institutional Church and have been for some time. They are in the service of the AntiChrist. All perfectly described by Cardinal Ottaviani in January 1953:
http://rorate-caeli.blogspot.ie/2015/06/reflections-from-cardinal-alfredo.html?m=1

And bishops do not wave at the people, they give them their blessing.

he is worse than a disaster...much, MUCH worse.

The beauty of our Catholic Faith is that Her Truth does not lie in the person of the Pope or a Cardinal or a Bishop. Though they deserve our faithful prayers by virtue of their Office, we are not obliged to follow every utterance and treacherous example they give unto the ruination of souls, and we are obliged to call them out.

Good reminder as we brace ourselves for the upcoming encyclical on global warming and the synod.

You mean a catastrophe? I agree and the worst is yet to come....

Another regrettable apt that many of the faithful must suffer through. Maybe not as bad as the apt in Chile? But obviously the care of souls does not seem to be high on the list of things to look for in an episcopal apt. This man cannot even wear his clerics which is not a good sign just that alone.

By the looks of this goofball he probably spends quite a bit of time on his knees receiving on his tongue.

It's time for the St. Nicholas treatment for these modernist filth bishops.

Another dysfunctional father appointed by the Congregation for Bishops. As the saying goes, a fish rots from its head.

Does he even deserve to be called a bishop? All these apostate "bishops" should be given the title they all deserve, anti-Christ.

Actually, if the Bishop requires that people receive standing, that is his right. He does not have the right to make a person receive in their hand however. I have to add that by the comments I have read on here, you all could use some time in front of the Blessed Sacrament.

Shame on you and all who constantly bash the Pope and clergy. If you are holier than them, show by charitably addressing concerns in private. Help the Church by becoming a catechist, lector, or deacon. The blogosphere is full of hatred for the Church. Blogs pose as news and claim they criticize errors of the hierarchy, but correction could be done privately. What we have these days is a feeding frenzy of hateful gossip.

So were Burke and Schneider inter alia.

My Lord Bishop. You Tahe Charge Of Your FloCk And Immediately Instead Of Showing That You Will Be A Good Shephard You Straight Away Offend Almighty God. And Embarres The Flock That Has Been Entrusted To Your Care.Instead Of Showing True Humility , You Have Displayed Filthy And Unforgivable Pride You Should Be Immediately Be Withdrawn From Your High Office And Made To Do Penance.Perhapts In An Austere Monastery Until Such Time That You Learn Respect For Those You Have Been Placed Over. Get On Your Knees And Ask God For Forgiveness. John Ambrose Carmelite Hermit.

My Lord Bishop. You Tahe Charge Of Your FloCk And Immediately Instead Of Showing That You Will Be A Good Shephard You Straight Away Offend Almighty God. And Embarres The Flock That Has Been Entrusted To Your Care.Instead Of Showing True Humility , You Have Displayed Filthy And Unforgivable Pride You Should Be Immediately Be Withdrawn From Your High Office And Made To Do Penance.Perhapts In An Austere Monastery Until Such Time That You Learn Respect For Those You Have Been Placed Over. Get On Your Knees And Ask God For Forgiveness. John Ambrose Carmelite Hermit.

The comment by anonymous on 16 June at 2:50pm is incorrect. Neither a bishop nor a priest can lawfully refuse the Sacraments to one of the faithful properly disposed and not prohibited by law from receiving them (CCL, cann.213 and 843§1). Even where the Holy See has approved local legislation denoting standing as the proper posture for receiving Holy Communion it has done so "with the stipulation that communicants who choose to kneel are not to be denied Holy Communion on these grounds". See letter of CDW&DS dated 1 July 2002, published in Notitiae, vol. XXXVIII (2002) pp.582ff., at p.583.

I would love to see the reaction of such a bishop the next time such a thing is attempted, were every single member of the congregation refuse to come up for communion.

Unlikely, of course - outside a traditionalist community. But it would be something to behold.

...or better, where every single member of the congregation gets down on their knees to receive the Lord in Holy Communion, on the tongue. Let him tell a few hundred to 'get up'. And next Mass, repeat. And repeat...until he goes mute.

I had to laugh at that. The Judas Council and its Dead Sea fruits is what comes of having a Pope who for all practical purposes is a little God, irresponsible, unaccountable, unimpeded by any law, restrained by nothing except his own conscience (assuming he has one). The Pope's power over the Church & everything & everyone in her would make a dictator envious. The Popes have abused their authority abominably these last 50 years, and if the present state of affairs is allowed to continue much longer the Church will be beyond saving - if it isn't already. How right Lord Acton was: "Absolute power corrupts absolutely". There is nothing whatever Christian or Petrine in having these little tin god-emperors of the Church.

"The blogosphere is full of hatred for the Church."

Dan, don't dispense advice that you yourself refuse to follow. If the faithful who knelt were doing anything wrong (and they were not), then scold the new Bishop of Taubaté for not following that advice. As for the meeting between those who knelt before Our Lord and the bishop who forbade them to, all one can say (with truly righteous anger) is faithful is as faithful does, and chulo is as chulo does.

'Actually, if the Bishop requires that people receive standing, that is his right'. By what authority do you assert this?

I am grateful for your looking up the relevant law, Martin.

As far as monarchical popes being dicatators, I am certain that any Pope hearing the statement would have been stunned. They might have been monarchs over Papal lands, but their authority, post-Trent, was often challenged. If, and I say IF, Francis is a dictator, it is because he is a lefty marching, ambling, really, through the final Institution, not because he is a monarchical Pope. To paraphrase Voris. "The lefty Church ain't so nice." And to cite Burnham's corollary, developed in part by watching leftoid clergymen, "The preferred enemy is always to the right."

Please give the Bishop a break. May this photo was taken after a round of golf.

On the other hand, I wouldn't confuse him with the honorable and hard-nosed former National Hockey League player Lou Angotti.

Should read "Maybe this photo..."