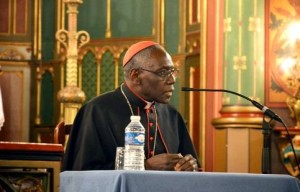 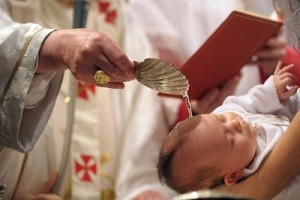 Through baptism a person is incorporated into the Mystical Body of Christ. Apart from the grace of faith, it frees especially of original sin. Benedict XVI.  made ​​shortly before his resignation an incomprehensible a change in the rite of baptism (see Change in the Rite of Baptism -. Recent Decision of Benedict XVI ), but on this occasion not a few years earlier determined by him,  the diminutio mentioned here was corrected.
The Roman Ritual offers, as an essential characteristic of our time, the possibility of different formulations, exceptions, derogations, additions made ​​by the respective Episcopal Conference. "This yes-but seems to have encouraged more minimalist shortening of the understanding of baptism as the faith, that is hardly mentioned, as Cardinal Sarah currently lamented" said Messa in Latino .
Text: Giuseppe Nardi
Image: Chiesa e postconcilio / MiL
Trans: Tancred verkon99@hotmail.com
Link to Katholisches....
AMDG
Posted by Tancred at 12:55 PM

The sacramental crisis is at the heart of every crisis in the Church, especially since the sacrament of Baptism is the gateway to all the others, and is ordered to communion. Since Vatican II the preparation for Baptism, and on going catechesis for the other sacraments of initiation have been abysmal. And the mess all started when bishops allowed priests to confer sacraments without first evangelising.

Cardinal Sarah has said many great things since he became the head of CDW, but, like so many others, he fails to understand the root cause for the vanishing faith. Until he and others in Rome are ready to reassess VII, then this decline will continue.

I'm not here to say restoring the Mass and dumping VII changes things instantly because they won't. Things will improve quickly, but several generations have been lost forever. Reassessing the last 50 years of madness would mean two good things thought. First, the quality of bishops and Cardinals would drastically improve. Second, the young would finally receive a good Catholic education that would pay dividends in the decades to come.

Now HE gets the gitters over statistics.

Odds are that Cardinal Sarah, like Pope Francis and Pope Benedict ,does not accept the rigorist interpretation of the dogma extra ecclesiam nulla salus, which says every one needs the baptism of water in the Catholic Church for salvation.
So the Traditional Latin Mass is not being allowed for the Franciscan Friars of the Immaculate, one of the reasons, is that they accept the dogma extra ecclesiam nulla salus ( even though with confusion). They are considered crypto Lefebvrists since they affirm that all non Catholics need to convert into the Church for salvation.This would include Jews.
Since the FSSP in general does not affirm the rigorist interpretation of the dogma they are allowed to offer the Traditional Latin Mass.They have accepted the new ecclesiology with the litturgy.
They interpret Vatican Council II with (A) being saved in invincible ignorance (LG 16) , seeds of the Word (AG 11), elements of sanctification and truth(LG 8), imperfect communion with the Church (NA ) and a ray of that Truth(NA 2) CONTRADICTING (B) the rigorist interpretation of the dogma extra ecclesiam nulla salus, the Feeneyite version.They have acceped the Cardinal Francesco Marchetti Selvaggiani model.
If you speak to Cardinal Sarah he will say that he rejects Feeneyism. This is expected of him by the Jewish Left. I learnt this in communication with Cardinal Francis Arinze at the Vatican.
So he interprets Vatican Council II with irrational Cushingism , which infers that there are apparitions in 2015 of persons saved in (A).There would have to be real apparitions for them to be exceptions to the dogma.
This is heretical and not real for Cardinal Sarah.Yet this is the reality at the Vatican.
If he says A is not an exception to B, since A is known only to God and is hypothetical for us, then it would mean there is nothing in Vatican Council II to contradict B(the dogma).
Yet we cannot expect Cardinal Sarah to be corrected since even the traditionalists make the same mistake. Even for the communities of Fr.Leonard Feeney in the USA, Slaves of the Immaculate Heart of Mary, A contradicts B. So for them Vatican Council II is not in harmony with the rigorist interpretation of the dogma ,according to Fr.Leonard Feeney.
Liberals and traditionalists are doing catechesis and theology with the same objective error.
_________________

If you speak to Cardinal Robert Sarah he will say that he rejects Feeneyism. So he interprets Vatican Council II with irrational Cushingism.
http://eucharistandmission.blogspot.it/2015/06/if-you-speak-to-cardinal-robert-sarah.html


Liturgy has been made subservient to political necessity.This heretical theology and doctrine ,this development, is necessary today to offer Holy Mass
http://eucharistandmission.blogspot.it/2015/06/lturgy-has-been-made-subservient-to.html

Maybe that's because no one is teaching it their to busy promoting other peoples religions .

I remember getting one of my kids baptized at a big city "diverse" yuppie-ish parish some 20 years ago. Of course, a hobby deacon, as the English call them, taught the preparation while the 70-something gay pastor arranged flowers in the back of the church, and the other priest, a 30ish up and comer who was on the archdiocesan fast track didn't have the time to be pastoral.

The deacon went around the pews asking why we were getting our children baptized. Other attendees responded to the effect "So he can be part of the Family of God." My response was "Because I want him to get to heaven. This is just the start." People edged away from me, and the discomfited hobby priest asked me no more questions during this class and the next final one.

That is not to say I didn't ask any.

We have been apologizing for the Church Teachings since Vatican II and I have encountered more so called Catholics who have not been not been catechized and are clueless about what Faith is. Even though thy don't attend church they feel entitled to the Sacraments.

I think we have a pope who advocates the that kind of parish experience on a Roman scale.