(Rome) The face and chest have been smeared with blood. It seems that some have taken the statue of the  Most Pure Virgin  to heart. The blood flows down her white robe.Thus, the large statue in front of the church of San Giovanni Battista was found on the outskirts of the Italian city of Lecce. The statue had been bombarded with red paint. On the outer walls of the parish church, blasphemous slogans were smeared in the same "bloody" color: "God is Trans", "pedophile priests", "Mantovano Taliban."
The judge Alfredo Mantovano was from 2001-2006 and 2008-2011 State Secretary at the Ministry of Interior. In 2012 he left politics and has been a judge at the Higher Regional Court of Rome. He is regarded as a leading expert in family law. Since 1976 he has been part of the Catholic Alliance.  Last week he was speaker at a meeting in the parish of the Catholic Alliance's "War Against the Natural Family Gender Ideology, was Organized Gay Marriage ". A current, but also dangerous subject. 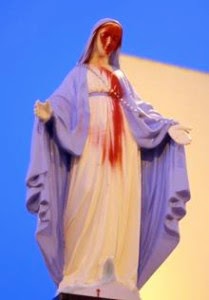 Virgin Mary statue in Lecce
There are left-wing groups that do not accept the human right of free speech and assembly for others if they do not  like the topic.  The intolerance of aberrosexual groups has  left a trace of verbal and physical violence  more recently in Italy: from the assaults on the Italian Veilleurs, whom they describe as "standing guard." The original just like the French hold silent protests in places and minister against the "gay agenda" and the destruction of the family; or the political and media lynching of any organization or initiative, which promotes the natural family, mother and father, a union of man and woman. That violence is possible because there is more and benign neglect by "moderate" circles. Lecce is located in Puglia. The Italian region of Apulia is governed by the avowed homosexuals and leftists attacks WikiLeaks since 2005.
Now the usual violent offenders have struck in Lecce. The Association LeA - freely and openly wrote the day before the attack that events such as the meeting in the parish "in a democratic, secular and advanced society are harmful to the dignity of all people, not just homosexuals because they are opportunities to incite homophobic hatred, not to spread correct information on LGBT issues and to promote a climate of psychological terror."  For this reason, the union announced a counter-rally -  which was supported by a vast number of large and small groups of the homo-, left, and feminist spectrum, including anarchists and sectarian Communist groups - as always.

The translation of the statement meant that the Catholic rally was intended to be prevented by occupation of the conference hall. In fact, the left-reinforced aberro hordes tried to storm the room, they threatened and insulted the conference participants. However, the pre-warned police managed to push them back and keep them at an appropriate distance.
A week later an attack was perpetrated on the statue in front of the church and spray painted messages were written on the church wall. The revenge for the foiled attempt on the meeting. An action against the Blessed Mother under cover of darkness and anonymity. The State Security has launched investigations, while parish faithful cleaned the walls.  Purification of the Virgin Mary statue is proving to be difficult. The face of Mary was the main target.
"God is Trans" has been sprayed by aberrosexual activists in Lecce. It commemorates the slogan "God is woman" by the unspeakable political mercenaries of Femen. Both are expressions of ideological delusion and cultural stupidity.
The Catholics today are the main target of the new totalitarian gender thinking and the new kingdom of alleged rights. A totalitarian and intolerant thinking that will sink in the name of human rights, to attacking Christianity and the resulting civilization, the values themselves ​​that have led to human rights. It's a dangerous game.
The statue of Lecce seems to cry even if it is only just color.
Text: Giuseppe Nardi
image: LeP / AC
Trans: Tancred vekron99@hotmail.com
Link to Katholisches...