Cardinal Baldisseri Undermines Catholic Teaching on Marriage -- But the Laymovements Say "No, Thank You" to Kasper-line 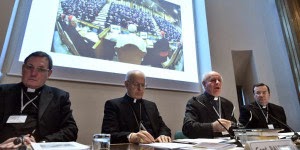 Cardinal Kasper Baldisseri and the agenda of Pope Francis: Listen to the laity, but silence them,
if they do not say what you want?
(Rome) Preparations continue for the Synod of Bishops on the family in 2015. The Pontifical Family Council has invited  the leaders of the world's most important Catholic layity to Rome to hear their views on the 46 questions of the new questionnaire from 22 to 24th January, which will be the basis of the Instrumentum laboris  of the Synod. But the result was not as Cardinal Baldisseri, the Secretary General of the Synod of Bishops had planned.  The cardinal, who acted as an extended arm of Pope Francis at the Synod of Bishops in 2014, was angry and broke out with rage in his statements against the lay representatives.

Lay movements: Yes to Loving Acceptance, but No to Communion without the State of Grace

Everything went down very discreetly. The communicative Secretary General of the Synod of Bishops, Cardinal Lorenzo Baldisseri, appointed by Pope Francis, made no public announcements.  This seems to have to do with the fact that the outcome of the hearing did not meet the expectations of the General Secretariat of the Synod of Bishops. The priest Santiago Martín, founder of the Franciscans of Mary conceived the opinions of lay associations in an essay titled: "Catholic Laity: Discount, No thanks!."
"Virtually all lay movements represented in Rome have spoken out in favor of retaining the traditional doctrine." The outcome of the hearing "would not clear and may be clearer. Practically the whole of those present in Rome, about eighty movements, including the most significant and most members who have spoken in favor of retaining the traditional doctrine. Everyone says that the process of marriage annulments  should be accelerated, but without making a Catholic divorce of it, and that the divorcee is to be met with great love, so that they do not feel excluded from the Church, but without prejudice to the Eucharist becoming devalued and are not allowed access to Communion without being in a state of grace. The base has clearly said, 'Discount, no thank you!' "

Frankness of the Laity, Who do not Like Rome - Cardinal Baldisseri's Indignant Reaction 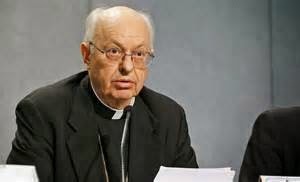 Cardinal Baldisseri
Laymen were posseed of that those frankness claimed, the Pope Francis in his welcome address had called for the opening of the Synod of Bishops on October 6, 2014. A frankness that a group of cardinals at the Synod revealed by defending Catholic doctrine against the papal supported Kasper-line. Even at the risk, thereby to fall into disgrace with Pope Francis, who actually made ​​an example by the Synod on the Word of leader of the defenders of the indissolubility of marriage.
Accordingly,  Cardinal Baldisseri, the Secretary General of the Synod of Bishops reacted angrily to the opinions of the laity. He defended the "right" of Cardinal Kasper against criticism of the laity, to require the approval of adulterers to communion. Cardinal Baldisseri spoke not of adulterers, but of "divorced persons who live in relationships unrecognized by the Church."

Baldisseri: Jesus' Words "Can be Called into Question"

Baldisseri contradicted the lay representatives, and they should "not be surprised", because there are theologians who oppose the teaching of the Church. What was understood by those present was that the Cardinal wanted to say that the Church's teaching is not so clear on the point.
Finally Baldisseri claimed that the dogmas of the Church "evolved" and that "there is no point to hold a synod, if you then just repeat what was always said."
But indignation among those present broke Baldisseris final assertion: "Just because a certain understanding 2000 years ago was in a place that does not mean that it can not be called into question."

The lay representatives could not wait to give their  ​​reaction. Patrick Buckley, the international representative of the Society for the Protection of Unborn Children commenting on the statements Cardinal Baldisseris, said:
"The Church's teaching on the indissolubility of marriage is based on the words of Jesus Christ. These words may have been spoken 2000 years ago, but remain an immutable law of God for the Catholics, nothing more and nothing less. "
Mary Madise, director of Voice of  the Family said: "Cardinal Baldisseri has publicly corrected one delegate, who protested the attacks against the Catholic doctrine. Unmistakably, the same thing did not happen not so shortly afterwards, where another delegate denied the Church's teaching on contraception. One had the impression that there is only one sin today, the defense of what the Church has always taught. "

"Sophistry of Professional Dissidents Does Not Help Suffering Families"

About the overall climate regarding the hearing from   the Roman position, Madise said: "It seemed as if one could discuss just about everything at this conference, including  questions that have already been clarified by the Magisterium of the Church. Such a debate distracts from the task of finding real solutions to the problems encountered by the families really face. The serious evils such as abortion, euthanasia and the attacks on the rights of parents was barely touched on in the discussion. These are some of the key issues that were incidentally also ignores the final report of the Synod in 2014. The suffering  of families is not helped by the subtleties of professional dissenters, whether these are church leaders or laity. "
Voice of the Family called for, considering the "shocking experience" a few days ago in Rome, all Catholics to unite in prayer so the Catholic doctrine affirms marriage and family in any document of the Pontifical Family Council in the wake of the conference and when the Synod of Bishops is formulated in the fall.
Text: Giuseppe Nardi
image: InfoVaticana
Trans: Tancred vekron99@hotmail.com
Link to Katholisches...
AMDG
Tancred at 11:32 AM
Share