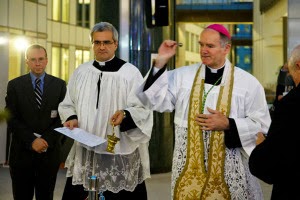 (Brussels) At the invitation of the Italian MEP Mario Borghezio (Lega Nord) and the initiative of the Civitas Institute, the Superior General of the Society of St. Pius X,  visited the European Parliament in Brussels, and blessed a nativity scene there.
The large crib is located in one of the central, public halls of the parliamentary representation of the European Union in Brussels.  MEPs  from France, Great Britain, Greece, Portugal and Italy, parliamentary staff and EU officials gathered to be blessed. In his speech  Alain Escada, president of the French Civitas Institute suggested that the baby Jesus in the manger should rule over all nations, since all power comes from God. For this purpose, he quoted the Pope St. Pius X,  as the 100th  anniversary of his death was commemorated in 2014: "The civilization must not be contrived, for it was, it is and it has been a Christian civilization, it is the Catholic society.  To restore it merely requires the unceasing renewal of its  natural and divine principles. "
Bishop Bernard Fellay said in his speech: "There in the mange is where it all started. So it is quite normal that Europe's guides, God the helmsman give Him glory, who came among man to save him, He, the King of Kings. Let us remember what Cardinal Pie said, 'When the moment for the lordship of Jesus Christ did not come, then the time has not come for governments to continue'. By the blessing of this crib, the Church is a connection between this place and the grace of God's love. This little place is a Sacramental for the benefit of all who come here to gather inside."
Bishop Fellay was accompanied by the District Superior of  Society of St. Pius X for Belgium and the Netherlands, Father Thierry Legrand is in the seat of the European Parliament. He stressed the importance of the initiative,   because of the increasing attempt to prevent the establishment of nativity scenes in France in public spaces and Advent and attempts to replace and reinterpret  Christmas Traditions with "Winter events" and "Year End initiatives."
Text: pius.info/Giuseppe Nardi
image: pius.info
Trans: Tancred vekron99@hotmail.com
Link to Katholisches...
AMDG
Posted by Tancred at 1:49 PM

Thank God for this little expression of acknowledgement of God's headship over all. Blessed Michael, the Archangel, defend us in battle . . .

Thank God for Civitas too. Here is the detailed review including several videos. http://www.civitas-institut.com/component/option,com_frontpage/Itemid,1/

What a great in-your-face bit of Catholic Action. Civitas is such a faithful Catholic organization.

Sounds like Bishop Fellay was very well received. I hope the SSPX is growing even faster now with the election of our heretic Pope ( animals go to Heaven...etc). So I gues that means, according to our enlightened Pope,the squirrel I saw get run over by a car yesterday is now enjoying the bliss of Heaven (LOL).
Anyway, I sincerely hope the SSPX is flourishing. I always thought it ridiculous that the good friars and nuns of the Franciscans of the Immaculate remain with the Vatican II Church, when all 500+ of them would be welcomed and appreciated among the SSPX.
Being in union with this kind of Catholic Church symbolized by Pope Francis and his mindset is not worth it. I would never acknowledge his agenda.

Interesting to note that they invited the SSPX despite the fact that His Holiness Pope Francis not long ago visited (and the faithful never bothered to greet him). The European Parliament is in Strasbourg.

The FSSPX has been growing mainly because it quenches peoples thirst for spirituality an intellectualism. The FSSPX takes the best from the Jesuits (e.g. 5 day Ignatian retreats), the Franciscans (e.g. Third Order), Dominicans (i.e. Thomism), Carmelite mysticism, and of course the Rosary. On the intellectual side they have all the best catechisms (e.g. Archbishop Sheenan, Baltimore, etc.), the best philosophy (e.g. aquinasphilosophy.com), Garrigou-Lagrange, Chesterton, and all those other giants before Vatican II. Oh and the whole Traditional Latin Mass thing, forgot to mention that, it's that Mass where you can actually experience deep prayer and contemplation, unlike the Novus Ordo where it is literally impossible to pray due to a complete lack of silence and a constant stream of priest/laity talking out loud to each other in a robotic and monotone voice.

The Jesuits fought Protestantism in the 16th century, the Franciscans fought Albigensian gnostics in the 13th century, and in modern times it looks like the FSSPX is fighting modernism and relativism.

The Novus Ordo is spiritually dry and intellectually brain dead, Catholic high schools are nothing more than atheist factories or New Age missionary zones, none of the people I know from high school are Catholic anymore. The Novus Ordo looks like death (half empty pews, grey hairs, bald heads, etc.) while the FSSPX is more fertile than the 17th century plains of the Ukraine (lots of young people, big families). The FSSPX has high retention rates for youth while the Novus Ordo practically forces its young into apostasy.

People can complain all they want. Jesus didn't say you need a Ph.D or Th.D to distinguish good from evil, Jesus told us to judge something by its fruits. The Novus Ordo looks dead and smells like old people. The FSSPX looks young and smells like baby powder. Jesus created a Church filled with life and joy, Jesus didn't create a bingo hall.

Bishop Fellay should bless,with Holy water ,the bishop of rome -it may bring him back to the Faith!God bless .Philip johnson.

The Pope drives me nuts as well, but for once it seems the claims that the media are distorting the words of the Pope are correct.

Bishop Fellay should go to the Vatican when all of the cardinals are present with Bergoglio and perform a mass exorcism.

Please, a bit of decorum. This is beginning to read like a blog from the National Catholic Reporter.

Why not just be positive about this one little protest against European secular, multiculturalism.

Lol, I thought they were very upbeat.

Happy Jack....do not mess up the flow of the feed

Plus Bishop Fellay has valid holy orders unlike Jorge and his cohorts.

Ever seen the pic of Fellay & Ratzinger greeting each other with a freemasonic handshake?

Well done, anonymous. You covered so much of all the good the
SSPX does and how they have taken something from each of those orders that used to be solidly Catholic. I do not think I ever saw a miraculous medal until I walked into a SSPX chapel. Also, there are always plenty of Rosaries in those chapels
and solid theology and Church history so people can make up
their own minds without being led astray by the NeoCatholic establishment.