500,000 At Pro-Family Demonstration in Paris 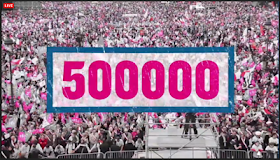 Edit: Tiberge reports on the Manif Pour Tous demonstration this weekend.  Once again, it's being downplayed by the authorities.

So far all I know is that it was a successful demonstration with about half a million in Paris and thirty thousand in Bordeaux. As always, these figures are subject to change. I know of no incidents yet. The Front National was there in force, with Aymeric Chauprade and Marion Maréchal Le Pen, without Marine Le Pen, but that is not new. One of Sarkozy's favorite ministers Michèle Alliot-Marie was there too, as were many UMP members. No doubt they are gearing up for a fight to restore the image of their party.