Edit: a courageous Catholic priest tells the truth, teaches the Catholic Faith and now the media is on the hunt. We’ll be following this to see if he shares the same treatment with other courageous priests who’ve offered themselves to say what’s right.


Bilderberger and Freemason leads a Catholic pastor to his media pillory, because he tells the truth - memories of times of Nazi church struggle. 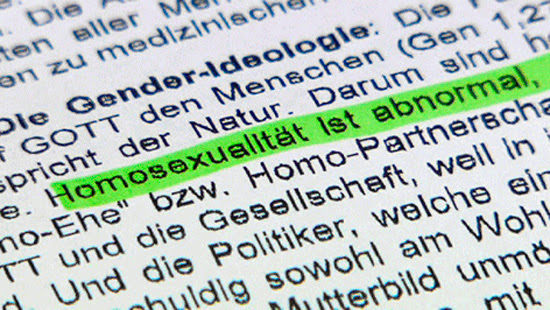 Thank you, Father, for the clear words  which the Austrian bishops are too cowardly to say![Image: Parish Journal Neukirchen a / d wild, quoted by ORF-NE]

Homosexuality - a Grave Sin “Against Nature"

Pastor Fr. André Wingen wrote in the bulletin of his parish in Neukirchen an der Wild, which is located in the district of Horn in Austria that:
This finding can not be refuted by the media whores, for if homosexuality is in the nature of man, then there would be no more people.
So long as there are still people, then homosexuality is something unnatural (see: "sins against nature” according to Catholic moral teaching) and perverse (see" pervertere ", lat).
This may be seen also in the Diocese of St. Pölten as: . "[T] he priest brings legitimate issues for discussion."
And "media friendly": "The discourse could be  'constructively‘ undertaken." - in the usually inefficient way asindicated by the bishops.

But godless journalists are simply not  thinkers, but are hanging by the strings of the capital elite, in order to uphold  the systemically important lies of the ruling despot.
Anxiously trembling for their jobs journalists will be thrown a few bread crumbs for their anti-Christian, while treading the bread of life into the dust.
The Press is enslaved by the devil which incites against Catholic priests and against the truth.

Enlightenment Struggle Against the Church

The poor Presstitutes  blaspheme, as in totalitarian systems, against Jesus Christ, who is to be stigmatized over again in the general public. Such stigmatization there was before the Second Vatican Council, for example, in the French Jacobin revolution and during the Nazi church struggle.
The lie factories of global high finance (i.e., all mass media) are calling ultimately the abolition of the Catholic faith and the Catholic priesthood.
The lie manufacturers give the well-orchestrated order to commence fire against a real Catholic priest.

Baiting of the ORF

The pro-regime and  state-funded (extorted) radio (ORF) persecutes  real Catholic priest as well, like all other mass media that are held by the financial oligarchy for the purpose of the dictatorship of opinion.

The mass media which is outfitted with power by Satan  beats the priest, but intends to strike Jesus Christ.