The New Cardinals of Pope Francis -- Essay on a Topography 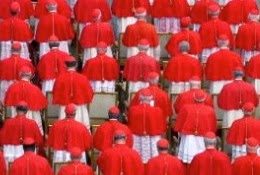 (Vatican) On 22 February is Pope Francis will create the first cardinals of his pontificate. The announcement of the new cardinals is expected for the end of January. Their number will be about fifteen new members for the Church Senate. The number is derived from the total number set by  Pope Paul VI. of 120 papal electors. The appointments will provide information about the sympathies and direction of the pontificate.
The appointment of cardinals belongs solely to the pope. It is bound by unwritten laws, which are still obligatory.  The first appointments will show whether Pope Francis holds to  the ecclesiastical practices like Pope Benedict XVI. and the other popes did before him. The appointment of cardinals will have a significant influence on the election of his successor to pope.

The Conclave and the Surprises


More than half of the voters in the last conclave in 2013 were appointed by Pope Benedict XVI . at the  most, a dozen cardinals were still eligible to vote who had not elected the Pope from Bavaria in 2005. Nevertheless, the conclave brought an unexpected surprise.
In the past, the cardinal surveys could be predicted very accurately with few exceptions. The new pontificate, however, involves uncertainties, as to how Pope Francis will handle it. The cardinal is traditionally associated with certain offices of the Roman Curia and certain Archbishops seats. Personal,  and therefore free appointments are made by the pope which are   only extended by granting the dignity of Cardinal to Catholic personalities who already exceeded their  80th  year of  age and thus are no longer eligible to vote in a conclave. Thus, they avoid the direct and open influence on their own succession.
For Archbishops at Metropolitan sees  that are connected to the dignity of Cardinal, the Cardinal's hat will only be awarded when the emeritus predecessor is no longer entitled to vote in the conclave. These rules make the elevation to cardinal more  manageable. With Pope Francis there are imponderables.

On 22 February, the day of the extraordinary consistory, 106 cardinals will be eligible to vote. The pope can appoint then  at least 14 new cardinals, to make the target number of papal electors complete. In the past this number has been  easily exceeded many times if more cardinals in the foreseeable future should retiring,  because the extraordinary consistory is relatively infrequent and replacements may not be immediate. Archbishop emeritus of Milan, Cardinal Dionigi Tettamanzi is retiring as a papal elector  at 80 on 14 March.
Over the next three years, a total of 32 cardinals will reach the age limit. As the Vatican expert Sandro Magister calculated, Pope Francis can already appoint in the first four years of his pontificate  50 of the 120 future papal electors. For the fourth anniversary of his pontificate in 2017, a conclave would be composed as follows: 53 cardinals appointed by Benedict XVI., 47 of Pope Francis and 20 of John Paul II

The Curia Candidates: Demoted and Promoted

Of the 15 new cardinals there are likely four or five who will be members of the Roman Curia. In the first place this applies to the Cardinal Prefect of the CDF, Archbishop Gerhard Ludwig Müller and the new Secretary of State Archbishop Pietro Parolin, the new prefect of the Congregation for the Clergy Beniamino Stella and the Secretary of the Synod of Bishops Lorenzo Baldisseri. The latter three were all appointed by Pope Francis and originate from the Diplomatic Corps of the Vatican. Archbishop Baldisseri has as Secretary General of the Synod, although not holding any office which is connected to the dignity of Cardinal,  was considered from the night before Pope Francis was elected,  as a candidate to the dignity of Cardinal, because the  new pope in the Sistine Chapel placed his Cardinal's zucchetto on him to  the acclaim of the Cardinals.
French Dominican Jean-Louis Brugues may not be considered, although he is the Apostolic archivist and librarian who occupies an office which has traditionally been connected with the dignity of Cardinal. However, the Curial Archbishop  fell with into disgrace with Jorge Mario Bergoglio  when he became Secretary of the Congregation for Education  when difficulties in the appointment of a rector of the Catholic University of Buenos Aires took him by the then Archbishop had chosen. The dislocation of Msgr Brugues by Pope Francis was read in this context.

If Moraglia Patriarch of Venice Will be Punished Because Sirian?

The remaining ten to eleven cardinals would be spread across resident archbishops. In Rome, it is expected that the Italian candidate remain empty like the Patriarch of Venice, archbishop of Turin  because with Parolin, Stella and Baldisseri, there are already three Italians who  belong to the curia are likely to be appointees. According to the Lateran Treaty of 1929, the Italian Church gets nine Cardinals: the Cardinal Vicar of Rome and the archbishops arranged in order of the size of their metropolitan province are: Milan, Turin, Naples, Palermo, Bologna, Florence, Genoa and Venice.
In case there  is still an Italian who should be appointed,  Pope Francis' choice is expected to fall to Archbishop Cesare Nosiglia of Turin and not to Patriarch Francesco Moraglia of Venice. Moraglia is considered Sirian and Ratzingerian like  Cardinals Mauro Piacenza and Angelo Bagnasco dismissed by Pope Francis.  Pope Francis clearly punishes  a direction in the Church.
Perhaps Pope  Francis will appoint   archbishops whose bishop seats are not connected to the dignity of Cardinal as well.  Among those heard about whom the Pope is suggesting is Archbishop Gualtiero Bassetti of Perugia, currently Vice President of the Episcopal Conference. Pope Francis Cardinal recently replaced Bagnasco with him as a member of the Congregation for Bishops.

Europe with the Candidates Nichols and Leonard

In Europe, it may be Archbishop Vincent Nichols of Westminster  and Archbishop Andre Leonard of Mechelen-Brussels as contender for the purple dignity. Nichols, last received   the attention of CDF because of the "Soho Masses", which he tolerated in London and  suppressed  by CDF Prefect Müller. Archbishop Leonard was appointed by Benedict XVI.   as the "hope" for a renewal of the Church in Belgium. The Archbishop is a thorn in the side of anti-Church forces and liberal church circles alike. Twice already,  Monsignor Leonard has been the target of personal attacks by the political activists of Femen. He has established since his appointment a point of contrast with his progressive predecessor Godfried Cardinal Danneels  who was able to participate in the March election of Pope Francis, but in the meantime has reached age of 80.
In the east-central Europe Sviatoslav Shevchuk, Major Archbishop  of the Greek-Catholic Church of Ukraine is among  the candidates.  He knows the Pope  personally, as Archbishop Bergoglio was also Ordinary of the Uniate Catholics in Argentina.

It is expected that Pope Francis, will convey the purple dignity  generously over Latin America. The candidates include his successor as Archbishop of Buenos Aires, Mario Aurelio Poli, the archbishop of Santiago, Ricardo Ezzati Andrello and the Archbishop of Rio de Janeiro, Orani Joao Tempesta. Brazil could also get another cardinal seat. The most Catholic-rich country in the world four cardinal seats today, the U.S. has eleven and Italy 26
The Mexicans and Chairman of the Latin American Episcopal Carlos Aguiar Retes of Tlalnepantla could be cardinal under Pope Francis. Also, Paraguay could get the first cardinal in its history. In the U.S., there would indeed a contender, but  an appointment by the Pope currently excluded. Whether the successor of Cardinal Ouellet as archbishop of Quebec will be cardinal is also to be seen.

Pope Francis is expected to preer Latin America, Asia and Africa over Europe and North America. Korea could get a first Cardinal seat, maybe even Japan, where the young Bergoglio would have liked to have gone as a missionary.
Interested observers are interested in whether the Pope will offer the oppressed churches of the Middle East with a cardinal's hat. Oceania has with Cardinal George Pell, the traditional friendly Archbishop of Sydney only a single cardinal. This gave Cardinal Pell a place in the eight-member Cardinal's Council. Some would be rid of him sooner rather than later.

Personal appointments of Pope Reflect the Clearest Understanding of the Church

Finally, the Pope or priests and theologians can distinguish with the cardinal's hat, those who seem to him particularly meritorious. Since Paul VI. 1970 set  the age limit for papal electors at  80, no pope has made more personal appointments before, including Pope Benedict XVI.. Thus honorees include the German Cardinals Brandmüller and Becker, as well as the recently deceased former Kapellmeister of the Sistine Chapel, Cardinal Bartolucci.
The personal appointments will  clearly express the Pope's attitude.
Text: Settimo Cielo / Giuseppe Nardi
image: Settimo Cielo
Trans: Tancred vekron99@hotmail.com
Link to Katholisches...