Pope Francis to Order: "No to Novice Trade, Otherwise We Will Form Little Monsters" 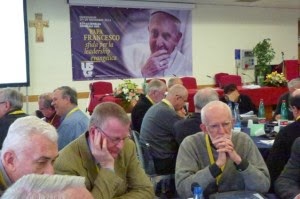 Edit: Also reported by Vatican Insider for a contrast.  It's unclear what he means by "novice trade", but it could refer to some orders which are growing, one in particular.  It's somewhat difficult to come to other conclusions looking at the topics for discussion.

(Rome) The Jesuit journal   La Civiltà Cattolica published an address by Pope Francis in its latest issue with the participants of the General Meeting of the Union of Superiors General (USG) of the last 29 November. "You have to form the heart, otherwise we will make little monsters", the Pope said.
At the curial headquarters of the Salesians at the General Meeting in Rome conducted the 82nd Assembly of the Union of Superiors General on 27 - 29 November 2013, 82nd.  Pope Francis personally took part, in contrast to previous general meetings on 29 November.
Pope Francis called on the religious superiors to put an end to the "novice business".  Civiltà Cattolica had published this with a notice to the new edition, which was published on the internet already yesterday.
The Pope on 29 November with 120 representatives of the Catholic Women's Orders. "You have to form the heart, or we will make little monsters. And then, these little monsters form the people of God. That gives me the creeps,"  is how Civiltà Cattolica cited the exhortation of Pope Francis to the Superiors. The quote is part of a detailed conversation between the Pope and the superiors about the challenges of religious life in today's world and the challenges in the Church.
Among the topics covered the Jesuit magazine writes:  "the complexity of life between grace and sin, the Prophetic being in our world; the brotherhood, the indictment of the" novice trade"; hypocrisy and fundamentalism; praise for Pope Benedict XVI. for his fight against child sexual abuse by clergy and the importance of charisms and the pressing challenges; the relationship between the religious and the bishops, the need of tenderness "to caress conflicts," and a jolt to awaken our unfeeling world. "
This edition of the Civilizations of Cattolica with the conversation appeared yesterday. On the Internet, they will be available from 15 clock in Italian, Spanish and English. Father Antonio Spadaro, the editor of the Jesuit magazine was one of the 120 religious superiors, the 29 November were received by Pope Francis. At 15 pages it summarizes the free and spontaneous approach proposed by Pope's address together.
Text: Giuseppe Nardi
image: USG
Trans: Tancred vekron99@hotmail.com

Those are priests in the picture?
I'll wait for the full translation but this sounds like an ominous hint that the FFI are only the first. I hope I am wrong.

I was hoping that was not a photograph of priests or religious, but can they possibly be the group the Pope was addressing???

These old men in street clothes: Jesuit priests? Very likely. They have hardly any novices to be concerned about. All the relaxing of the disciplines has almost emptied out religious orders to the detriment of the whole world. Yet when one order embraces traditional disciplines (see http://stim.immacolata.com/) it is smashed and the snide remarks against good and true formation have been abounding.

Also the author of this blog asks for more visits and especially prayers for the beleaguered FFI which tried to have a powerful, prayerful discipline in a modernist climate: http://pray4thefriars.wordpress.com/

They're superiors from all different orders, not just Jesuits.

Superiors? At a formal Church event? Addressed by the Pope? That's even worse! Lord have mercy.

"Superiors? At a formal Church event? Addressed by the Pope? That's even worse! Lord have mercy."

## The photograph looks like something from an old people's home. Abp. Lefebvre was absolutely right about the importance of the habit:

"The abandonment of the cassock, the primary cause of the decay in ecclesiastical discipline" - go to:
- http://rorate-caeli.blogspot.com/2012/04/abandonment-of-cassock-primary-cause-of.html

I thought Shriners, may God forgive me.

At first I didn't know what was meant by this Pope and his comment about no "trading of novices".
I am not sure, but what I think it actually is, is the practice of many European and now also USA Orders to recruit Indian, Asian, and African as well as Latin American novices to re-populate dead convents,seminaries, monasteries or clositers and other religious houses in Europe.
It is absolutely astounding the collapse of religious life, beginning immediately after the close of Vatican II. As early as 1971, the un-great Pope Paul VI lamented the recruiting of overseas novices to fill emptying Italian convents. Male and Female European Orders have now been doing this for nearly,since the disaster of Vatican II and the liberalizing of religious Orders.
The Jesuits are dead in Europe (less than 400 remain in Italy....there were nearly, 3,500 before Vatican II ! Only 200 in Great Britian and less in Ireland, only 80 in Austria. There are now less than 17,000 Jesuits in the world, less than 14,000 Franciscans, only 2,700 Augustinians, less than 15,000 Salesians, and only 5,600 Dominicans. Other Orders like the Servites (700), Mercedarians (690), White Fathers (1,280) and the Trappists (1,800) all have extremely aged members, and practically ZERO novices.
With this man as Pope now, he is ruling against the recruiting of African, Asian, Latin American novices coming to Europe to keep the nearly extinct Orders still barely living. Even though I can not stand Pope Francis (and his decision today........Jan 4.........to disallow any more Monsignors except for priests 65+ is one more bad move by him...........his ruling against the trafficking/trading of novices will help the liberal Orders in Europe die out faster. GOOD RIDDANCE.

This photo of the aged priest superiors of Orders is really hysterical!! LOL!!! The rotten fruit of Vatican II is manifesting itself, and people from the Pope on down are too stupid to recognize it. To give him credit, Benedict XVI recognized it somewhat. But he was a coward to resign and hand the Catholic Church over to this supremely corrupt Pope Francis.
This photo is very humerous in another way. Although these guys are all old...most pushing 70....they represent the :youngish" membership of their Orders! Most Orders of men...and more so for liberal Orders of nuns, have a median age of at least 74. Some have a median age of their members in their 80's! So these Orders won't be around long. Alleluia.
And neither, we hope, will this Pope.

now no novices, no titles, no red shoes...yes Fr Frankie is doing is best to disappear the Catholic Church; but then disappearing good things, including people, is not something, he should be completely unfamiliar with, according to some sources.

I considered what the Pope is really doing..He's cleaning house. If he is to change anything at the Vatican he has to do a clean sweep and redefine the direction of our church. Lets hope he gets rid of the Curia. Leave a legal dept and a accountant. The structure would be Pope> Bishop> Priest. Get rid of the Cardinals and Arch Bishops .He is doing just that now I see the Monsenior title is no more so lets see what is next.

Anonymous at 7:45
You must me a radical liberal Catholic. Do you really think faithful Catholics will go along with the kind of changes you suspect this nutjob Pope Francis will implement. His decision to disallow new Monsignors is a huge mistake. It will trigger a massive decline in seminaries. Just like anywhere else (companies), priests with intelligence,skills, talents, appreciate the opportunity to advance. Naming of new Monsignors was such an advancement. It was a cause of pride not only for the priest, but for the sponsoring diocese.
Now priests have no hope or incentive for advancement or some reward for a good job. This Pope is worthless. He is not even Catholic. He is wrecking the Catholic Church.....even some Bishops in Europe have said so.
The sooner he is gone...and I hope it's soon....he's already been in nearly 1 year....the better.
Benedict XVI should be ashamed of himself for opening the door to this in the first place.

With the Pope disallowing new Monsignors, look for the SSPX to explode with new supporters, priests, religious, faithful. Also look for new sede-vacantist traditionalist groups to spring up to preserve the Catholic Faith....to preserve the rank of Monsignor, and other traditions this guy Francis seems determined to destroy.
Isn't there a prophecy about a Pope coming who actually is just a wolf in sheeps clothing.....who looks like a Pope , speaks like a Pope, and attracts crowds like a Pope but who leads the Faithful into error? Maybe that is this guy. He's a Jesuit. THat's enough to be suspicious.

Never in the history of the Church, I bet, has a Pope called his priest sons--all of whom along with him share in the one priesthood of Christ, monsters. But then this Pope seems to always be calling someone a name but we cannot always figure out just who. He speaks of the sin of gossip yet he is one to be a name-caller and speaks poorly of many others.

Agreed. he also told us to contemplate The nativity in silence but he can't shut it for two hours.

1. They look pretty old to me.

2. This may have been a preliminary meeting. I don't have any doubts this photo shows superiors as the photo originated from USG itself.