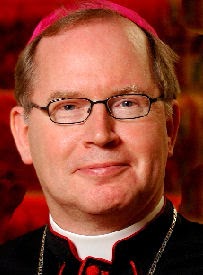 Cardinal Eijk correctly and clearly states what is obvious to a Roman Catholic and what is uncomfortably inconvenient for the Novus Ordo post-conciliar papal establishment to hear. Such Tridentine teachings have the seal of infallibility - get out of that if you can. Of course, the liberal modernist bandwagon church of the 21st century hates anything so lucid and unambiguous as traditional Catholic teachings. No wonder they avoided Our Blessed Lady's status as Mediatrix of All Graces. Such an embarrassment to the ecumenical enemies of the Immaculata.
Cardinal Eijk is evidently looking to be pushed under a Vatican bus and very soon, too.

Well done Cardinal - how about abandoning the protestant NO liturgy which has effectively been anathematised by the same Councils & Pope St Pius V? Is it not time for you to be saying the Latin Mass as well?

he gives the lie to the insinuation by Pope JP II that Luther was righteous and by implication needs to be rehabilitated. Yet another reason to stop the hideous simulation of canonisation in April of another de facto liberal modernist and phenomenological neo-catholic.

Leon, Leon, don't you know that ALL religions are good and beautiful and lead to God? Courtesy of the Bishop of Rome.

Yes, of course, anon. Must be obedient to an ecumenical interconfessional freemasonry-friendly zionist sympathising liberal modernist de facto schismatic Latin-illiterate papacy. We shall soon be celebrating a golden anniversary fifty years of disobedience to obedience to ecclesiastical disobedience.

Hooray for Cdl. Eijk! May he be papable!

Uhh ... He was kidding around with you. Laterz.

Praevalabunt, I guess. B'hai looks like a fun religion, I spose

Is his pictorial beheading an ominous sign of his future fate I wonder?

I'm going to have to fix that.

What I really enjoy now is the sheer joy of seeing this ghastly modernist church reeling having tried to convince us it was all so wonderful a future and that the 1965 year nightmare of darkness and tradition was safely behind us. I've never felt better since J II had to admit to the silent apostasy after his "Springtime of The Church" delusion for so long prior to that. What is so hilarious now is that the rest of the dopes still believe all this rubbish.

I thought you were being symbolically prescient there Tancred.

The best Bishops are increasingly persecuted in the most "exquisite" and devious ways.

According to this site and the article in Italian posted there, Cardinal Eijk did not utter the words attributed to him regarding the Council of Trent.

Congratulations for cardinal Eijk. His words are true.

The instant JPII died, he should have been made a saint! Sancto Subito!