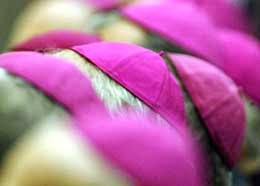 In Milan, the cardinal said: The Church in Austria "has suffered some humiliation in recent decades", partly because "it was an Imperial Church for historical reasons, and is therefore seen as a Church of the ascendancy, toward which one has no confidence". Currently, "only 38 percent of citizens of Vienna profess to be  Catholics," he said "we have become few... we are losing one percent each year," for that reason one has to ask  the question, "What will the Church in Austria  be over the next 20 or be 30 years? The question of the mission is urgent,"  "I do not know exactly what to do... First and foremost is a painful goodbye. . Letting go of a past that does not come back, the Church will be different and be missionary."  They would "have to be brave to come down" and avoid the "liberalism", and "that which accepts everything and the profile of the Christian life, and the rigor that sees only the law." An interesting experience "is to hold the Diocesan Assembly, not to debate 1,500 people in the cathedral of Vienna, but to tell how  every action of God appears in one's own community, to fix one's eyes on the action of God rather than on the problems. All of them can step up to the microphone and speak for a minute on this issue." Cardinal Schönborn reported that in each parish visitation  " there is a time for  street mission."  "I, Cardinal, stand in front of the station and give passersby a small gift with a few verses of Scripture and a smile. Every time I do this, I go back home very satisfied, it is a joy that can not be explained, the joy of evangelization."  The laity, says the Cardinal, are called to rediscover  "the common priesthood of the baptized...their mission to sanctify the world," reported Vatican Radio on 11 December.

From the "Usefulness of the Church Crisis" for "Another Church"

Messa in Latino has an entirely different view that speaks of the "Christmas Nonsense" of  Vienna's Cardinal and a "utility of the Church Crisis" for those parts of the Church, by the constant "provoking and mourning one crisis in the Church ', especially intended to create  'another church' and lynch those who want to fix the real crisis for the protection of the Church of Christ and the salvation of souls."
As  "one of many negative examples from the Archdiocese of Schönborn,"  Messa in Latino refers to an "obscene video" that shows "the squalor" that was presented in the Cathedral of Vienna in Advent 2012, not after, but tolerated "while" a Mass was said. The musical was Sister Act was listed by the Ronacher Theater. Apparently it was an opportunity to promote the musical, where the singers performed  excerpts from the musical during the Holy Mass. This took place even though neither the lyrics nor the melody of the musical have anything to do with the Divine Liturgy and the singers appeared dressed as nuns. The celebrant was the all too familiar "urban pastor" and friend of  Freemasonry,  Cathedral Rector, Toni Faber. The whole thing included the obligatory applause as in a theater.

Schönborn: "Leave the Nostalgia, We Say Yes to Today"

"It seems to me to recall a statement by  Bishop Fellay to Pope Benedict XVI: The problem in the Church today is not we [the Society of St. Pius X.]. We are only a problem, because we are saying that there is a problem," said Messa in Latino . "And what does that tell us Cardinal Schönborn? , Let the nostalgia of the 50's go, those of my childhood, in the village, when the Church on Sunday was full three times. All in the Church.  Leave the nostalgia for the vibrancy in our parishes in the 50s and 60s. Say Yes to Today ', implored the Cardinal. Applause. "
But what is the Cardinal trying to say: leave his nostalgia for a Church that gathered the people before the altar to say "Yes to Today"?

"Nos sumus tempora: quales sumus, talia sunt tempora", is what the Church Father Augustine replies to the Archbishop of Vienna. We are of the times we are in, because we are just as we are, so the times will be in which we live. What then does the emphasis on the "Today" mean  to Cardinal Schönborn? "It is we who have opted for almost 50 years, that the Church is in crisis," said Messa in Latino . "We have decided that there is a Church crisis, we are talking about this crisis brought about since then and have let them spread".
How did this crisis come about?  "Is it coming from the Council?  If  it goes back to the period before the Council? Emerged only later? Does it come from the Trompia Valley (where Paul VI was born.)? Does it come from the (small or large) Orient?  That ultimately is not important. The main thing is the crisis. It is the crisis that drives us, which makes for  looking for 'solutions' and 'ways out' to gather our 'forces' through 'changes' in  thinking. The crisis is the ultimate determining. The crisis is now so ubiquitous that everyone, no matter where he is in the Church, it is impossible to see the Church outside of a crisis. And who was working, not to focus on  the crisis, but to understand with immaculate and Franciscan joy 1   the Unum necessarium, but were cowardly passed over  to the executioners (comparisons with foxes released into the chicken coop is intentional). " 2

The Representatives of "Another Church" are in Crisis

The constant reference to the crisis, whether these and from the before, during or soon after Vatican II, "sets the stage for the state of a permanent Council, which  the modernists seek as institutionalized relativism, the progressives, Ante Pope Martini and others "(for Ante-pope see the report Carlo Maria Cardinal Martini - A Necessary Obituary of the Cheering Choir ).
"And because some Church leaders have become so accustomed to the rhetoric of crisis, they almost need  the crisis. It allows them to consider everything and a lot to do. Anyone who tries to turn off the crisis by  recalling the order and doctrine of the Church, is excluded. He disturbs the harmony of the Church crisis. The mirror which shows what is reality is very different and many do not want to look. Praise, however, comes from those marginal parts of the Church, who celebrate the  the crisis even more loudly. The Church from Below , We Are Church , Hans Küng and Leonardo Boff's  are feted by cardinals like Lehmann.  Pope Benedict XVI. invited Hans Küng in at the beginning of his pontificate. In disobedience and pride of the world, the  acclaimed ethicist spoke out against the return to the bosom of the Church. Pope Francis has written two letters to him now already. The repentance of an apostate is not in sight, the muses now prefer the final affront to God  and thinking about suicide over the Church," said Messa in Latino.

The "Church Crisis" as it has presented itself for half a century, therefore, was an invention of the modernists. A functional rhetorical formula to enable the building of "another church". "In reality, there is no church crisis.The people may be in a crisis or the clergy, but not the Church. iterum dico, gaudete, the crisis of the Church does not exist. It is rather the "new religion" of the Modernists, which is in permanent crisis, but not the everlasting Catholic Faith. You have  the  wishful thinking of a crisis, they evoke the crisis, they have spread it by other Catholics infected with it. In whatever senior position they may be, they are in crisis, not the Church. The rest is merely a dialectical artifice, to outwardly convey the opposite,"  said Messa in Latino .

At the End of a Provocation

In concluding these remarks on the visit to Vienna in Milan  Messa in Latino recalls a provocation by Giacomo Cardinal Biffi on "New Church, new gospel":

"The kingdom of heaven is like a shepherd which has a hundred sheep, and having lost 99 sheep, he blamed the last sheep, because it lacked initiative, he chased it out, locked the stall and went to the inn to discuss  sheep farming. "