47 year old priest performer and a graduate of the Vienna Seminary was convicted of homosexual abuse to four years in prison (not final). 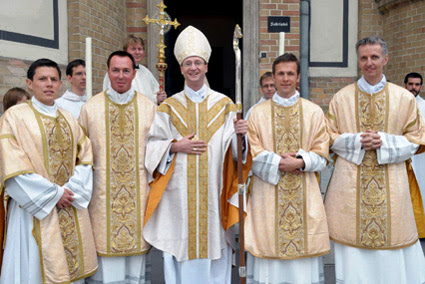 The Vienna Auxiliary Bishop Stephen Turnovsky is surrounded by two gomorrists (declared): P. Fabian Vordermayer (left of the auxiliary bishop), and Wolfgang P. Kimmel (right of the Bishop) received the diaconate in 2009  with a very "special" touch [Image: Wiener Seminary ]

(! Diaconate 2009) The ex-priest  of Traiskirchen, who is a very successful graduate of the Vienna seminary, was sentenced on the feast day of St. Nicholas (December 6, 2013) in the first instance, to four years in prison (legal disclaimer: there is a presumption of innocence).
He is accused of sexual abuse, of course, and Schönborn's sexiest pastor has brought ​his victims into submission with narcotics and like substances.
Father Fabian considers himself indeed innocent, but he of all people should know that only children can be regarded as innocent beings.

Where is the anti-Christian Media Pack?

In the case of the seminary in St. Pölten, where there supposed to were to have  allegedly been homosexual relationships, it was opportune to  eliminate the then Bishop of St. Pölten, because he was faithful.

... That can not happen Archbishop Schönborn!

The Archbishop of Vienna can not be set aside, because this one puts aside the possible and impossible witnesses to everything.
In the case of the seminary in St. Pölten unnatural sexual intercourse was exploited to eliminate a targeted Catholic bishop.
Also, the predecessor of Cardinal Christoph Schönborn, Cardinal Hans Hermann Gröer, was chased from pastoral office with the same tactics.
But now the cowardly and media savvy  pack ducks away.
The director's chair for these diabolical attacks on our Catholic pastors seems to be placed in the middle of Vienna.

After the few reigning faithful Catholic bishops had been eliminated by character assassination, the path was clear for the Church infiltrators.
The faithful had now been replaced by an internal Church gay lobby. Cardinal Schönborn said about :
Cardinal Schönborn even replaced a faithful pastor, by a homosexual parish council president, as in the case of the pastor of Stützenhofen:

Tactics of the Church infiltration

The tactics of the Church infiltrators seems to work:
On the one hand, homosexuality was exploited in order to get rid of Catholic Bishops and on the other, the Church in Austria is now infiltrated by homosexuals to get rid of the Catholic faith.
In the environment of Cardinal Schönborn's the attitude of a Homo-terror  is applied toward the erosion of the Catholic faith.
The left professional informers only seem  to follow in their smear campaigns against Catholic bishops and priests only to engage in endeavors within the Church that have the destruction of the Catholic faith as the only goal, because in the case of the ex-priest of Traiskirchen these hypocrites are silent.

Of the four seminarians who were ordained deacons in 2009 by Bishop Turnovsky, at least two  have  a lived a "weird" relationship of homosexuality: the aforementioned Fr. Fabian Vordermayer (pictured above: the left of the auxiliary bishop).
The second (now a consecrated priest) Deacon (right next to the Auxiliary Bishop of Vienna) is  Fr. Wolfgang Kimmel , beaten on again off again Catholic and priest, whom the Modernist theologian  Paul Zulehner has against introduced to the Vienna Cardinal.
In Kimmel's narrative, that he also supposedly had been  groped by Cardinal Gröer, doesn't gather any (paid) media interest any more: The sinner Hartmann was faster, history punishes the late comer.

As a result of these modernist purges within the Church (with the support of the media from the outside) we come upon a suitably wicked and repulsive clergy, which sometimes even assaults children and boys -   but this irritates the conformist media much less than faithful bishops.

Questions to the church leadership

They should fear more the punishment they will receive from the Just Judge for MOLESTING THE PRIESTHOOD.

A man from Chicago who was an alderman and radio talk show host once told his story of how he attended a seminary school in his teens. One night after arriving at the seminary he was approached with sexual advances from one of the guys in authority, he boldly rejected the advances of the man. Within 2 weeks they asked him to leave the seminary, telling him he just wasn't right for the priesthood. I've heard similar stories from many men since. I suspect this sodomitic selection process is wide spread and still in use. This is what Bernardin did in Ohio with his seminarians also.

I think the reason they're not reporting on the priests abusing children is because it seems that some are working towards the legalising of paedophilia.

White American pedophile in his 50s living in India.

He has a prior history of child molestation in India, has been caught a couple of times.

He was caught a few years ago in Cambodia, molesting a couple of 12 year old prostitutes, and spent a year in a Cambodian prison for it.

He also goes by the sanskrit name "Tattva Darshan Das".

Couple of news articles about his past history: