Father Barron's Hope of Universal Salvation is Wrong and Heretical 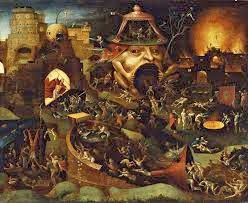 And I saw a great white throne, and one sitting upon it, from whose face the earth and heaven fled away, and there was no place found for them. And I saw the dead, great and small, standing in the presence of the throne, and the books were opened; and another book was opened, which is the book of life; and the dead were judged by those things which were written in the books, according to their works.  And the sea gave up the dead that were in it, and death and hell gave up their dead that were in them; and they were judged every one according to their works.  And hell and death were cast into the pool of fire. This is the second death.  And whosoever was not found written in the book of life, was cast into the pool of fire.

Edit: There are some people out there who are already making false statements about Father Barron's disinformation and frankly modernist conception of Hell, which he doesn't actually believe is a physical place.

Hell is a place of terrible proportions and frequently mentioned in the Scriptures, and the history of the Church.  It's always described as very densely populated.  Catholics have always believed this way, but now there are those who are trying, against the evidence, to suggest otherwise.

Most people go to Hell.  It was widely considered that as it is written, "wide is the path of destruction",  that Hell was full of sinners.  It was and remains a real place of torment.  Yet as is usually the case with many among the apologetics mafia, that's not good enough, how our forefathers believed.  Yet as in all ages, there are many who want to believe false doctrines and follow false teachers.

Their ears are itching after novelties. Not a few people  want to oppose a modern view never held by Catholics, that Hell might be empty.  One of the poisons administered is to suggest that if Hell is so full, it would make us despair.   Clearly men are incapable of being a sign of contradiction, of accepting the hard sayings, and suffering and trusting God's word.

After this many of his disciples went back; and walked no more with him.


Dante populated Hell with friends and enemies alike in his Divine Comedy,  there were points it seemed  that the whole world was going to Hell, but this didn't stop Dante believing or hoping in his own salvation, or perhaps those close to him.  Most Catholics had no trouble believing these two, non-contradictory ideas about Hell, God's mercy and his justice.   Pope Benedict XVI. especially taught that  there is a place called Hell, again in contrast to those timely fashions:


Pope Benedict XVI stated: "Jesus came to tell us that he wants us all in heaven and that hell, of which so little is said in our time, exists and is eternal for those who close their hearts to his love. "[Holy See, website]

As to the idea that Hell might not have any human beings in it, which *is* a statement of universal salvation, a clearly heretical doctrine, Theologian Ludwig Ott writes:


God, by his eternal decree, has predestined certain persons, in anticipation of their [unrepented mortal] sins, to eternal reprobation [or punishment].[Cf Is Hell Empty?]

Also, there is nothing in Spe Salvi which says that Hell may be empty.


“Often, when it is the king or some other monarch or potentate that he (the judge) has to deal with, he finds that there is no soundness in the soul whatever; he finds it scourged and scarred by the various acts of perjury and wrong-doing ...; it is twisted and warped by lies and vanity, and nothing is straight because truth has had no part in its development. Power, luxury, pride, and debauchery have left it so full of disproportion and ugliness that when he has inspected it (he) sends it straight to prison, where on its arrival it will undergo the appropriate punishment ... Sometimes, though, the eye of the judge lights on a different soul which has lived in purity and truth ... then he is struck with admiration and sends him to the isles of the blessed” [Cf. Spe Salvi, Gorgias 525a-526c.]

Image of Hieronymous Bosch from Indianapolis Institute of Art.