Edit: here's the translation of Katholisches.  Usually, it's on Asianews, but since they haven't translated it into English yet, here it is:

(Hanoi) The Vietnamese police attacked a peaceful rally of Catholics in the parish of My yen. With batons, electric pulse weapons, tear gas and shots in the air with live ammunition, the Vietnamese police took action against several hundred Catholics who were demonstrating for the release of two parishioners. The two Catholics are in prison without charge since June. According to witnesses, it was one of the bloodiest and most brutal of anti-Christian police actions in recent years. 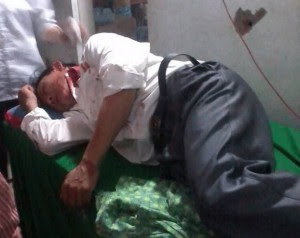 Several dozen Catholics were arrested. The number of injured is much higher. The seriously injured were taken to Hanoi. Several of them are in  serious condition. My Yen is in the province of Nghe An, a coastal area in the central north of the country.

According to pro-government state television on Wednesday the Catholics drew up in the wee hours of the church near the seat of the People's Committee of Nghi Phuonh in Nghi Loc District. They demanded the release of Ngo Van Khoi and Nguyen Van Hai. On the evening before about a 1,000 Catholics had been demonstrating for their release. The authorities had announced after numerous petitions of the parish, the release of the two Catholics, without any conditions. The two men are still in custody

Radio Free Asia reported, the police appeared in front of the parish church of My Yen firing warning shots to disperse and to intimidate the Catholics. As they would not retreat, "the police came beating with batons and electric batons on the demonstrators." One of the Redemptorist affiliated websites has published numerous photos of some of critically injured Catholics. Many have head injuries. According to witnesses, about 3,000 police officers and soldiers had been used against the Catholics. Doctors were prevented from coming to the aid of the injured.

The two Catholics, Ngo Van Khoi and Nguyen Van Hai had been arrested in June by a special command of the security forces. Since then they are in detention, without  officially being charged of a crime. The families were initially told that they were for "disturbing public order" and in security custody. >Since this "disorder" is said to have taken place, it has not been clarified.

Vietnam has resisted   demands for religious freedom  and continued repression. The security forces take action against bloggers, dissidents and human rights activists who are calling for the right to religious freedom.  In 2013 more than 40 human rights activists have been arrested for "crimes against the state".  The arrests are made on the basis of a provision that classifies general and vague human rights groups as "subversive". In January, 14 were Vietnamese, including several Catholics, were sentenced to long prison terms on charges of "attempting to overthrow the government. A judgment that has been branded by many human rights organizations as political despotism.