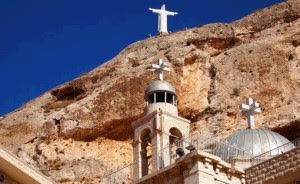 Edit: what would have inspired men from all over Europe to take up the sword in one hand and a cross in another, today inspires Leftist politicos to join in on the looting and the day of  reckoning for Christians living in the Middle East.

(Damascus) The Christians of Maalula are on the run. From the only village in the world in which Aramaic, the language of Jesus, is spoken, the vast majority of Christians have fled. The town was devastated by the attack of Islamists. The jihadists began the systematic destruction of the building on behalf of the Free Syrian Army, which wants to move the U.S. President Barack Obama to bring the U.S. into the war. Of the 3,000 inhabitants only a few hundred have returned to the place of the attack to protect the homes from looters. The majority of Christians remain hidden. For great is the fear of the Islamist militias.

A priest of Maalula is quoted by Asianews quoted as saying: "This morning, the terrorists have torn the crosses from the domes of the St Sergius Monastery. This is an open declaration of war against the Christians. By the removal of the crosses they want to send an unmistakable message: Now you Christians get your turn, now anything can happen."

The priest reported that the Islamists wanted to penetrate some quarters on Thursday evening, but then withdrew again. "Our youth have defended the monasteries, churches and our homes. But they are not warriors, they are not trained, these are contrary to peace. That left only the flight. All flee Maalula, because there is no life here with Islamists. "

The priest criticized the Free Syrian Army. While these have always denied links to Al-Qaeda and even released on videos on Youtube that allegedly show their fighters in the defense of Christian churches. "These videos are just propaganda," said the priest. The only "free" in this army is the word in the name. "In reality, they threaten us Christians. You have always told us that your hour comes, we'll take care of you. And now they say your hour has come."

Maalula is a World Heritage Site according to Unesco. The town is located some 40 kilometers north of Damascus. The monasteries of the place are the destination of numerous pilgrims.