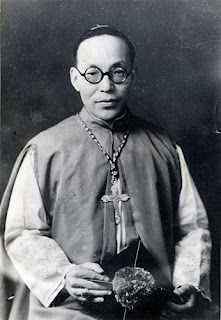 (Vatican / Pyongyang) the whole drama of Catholics in North Korea has been concentrated in the form of Catholic Bishop Francis Hong Yong-ho. The oldest bishop in the world at 106 years has now been officially declared dead by the Vatican. Published twice a month, the Secretariat of State changes the Pontifical Yearbook. In the publication of the 1st of July, there was a note with North Korea, the last surviving Stalinist dictatorship, which also comes at regular intervals into the headlines, because it threatens to use nuclear weapons.

The note says that the Holy See has finally declared the Korean Pyongyang diocese officially vacant. This required that the Vatican Bishop Francis Hong Yong-ho is held to be dead. For many years, the entry of the diocese and Bishop Pyongyang Hong Yong-ho was one of the most mysterious and the most remarkable of the Pontifical Yearbook. Here, the traces of the Bishop were lost long ago in 1949. Since then, the bishop was declared missing for all for 64 years.

Born on the 12th of October 1906, Francis Hong Yong-ho was ordained a priest in 1933 in 1944 he was appointed Vicar Apostolic by Pope Pius XII., and consecrated a bishop (for the biography of Bishop Hong and the situation of the Catholic Church in North Korea at the beginning of Communist rule see report 1 and report 2 for the martyrs of Tokwon at the mission of the Benedictine Abbey of St. Ottilia). Bishop Hong Yong-ho fell victim like many other priests at the end of the 40s to the terrible persecution by the Communist regime of Kim Il-sung.

Official information on the whereabouts of the bishop do not exist. With the small willingness to provide information by the regime it was only last succinctly reported that a person of this name was not known in North Korea.

For 64 years the Pontifical Yearbook reported bishop Hong Yong-ho still as "missing". Most recently, he was the oldest bishop in the world. Initially it was hoped in Rome that the bishop was imprisoned in a Communist concentration camp, but was still alive. Over time, it became increasingly clear that Bishop Hong Yong-ho was probably murdered by Communists in 1949 and disappeared in a mass grave.

The Vatican maintained his status for lack of official notification of death. Bishop Hong Yong-ho became a symbol for the Catholic Church extinguished in North Korea. But he was also a symbol of political resistance against the regime that has trampled freedom of religion under foot for two generations.

Bishop Francis Hong Yong-ho, the drama of the Church of North Korea

Each new year a mirror was held up to North Korea by the entry in the Pontifical Yearbook. The Bishop who disappeared in 1949 and the North Korean martyrs were not forgotten. "A gesture of the Holy See to draw attention to the drama that the Church has witnessed in Korea and are still experiencing," says Cardinal Nicholas Cheong Jin-suk of Seoul (the drama of Christians in North Korea, see separate report ). Pope John XXIII who was aware of Pyongyang, raised the Vicariate Apostolic to the level of a Diocese on March 10th, 1962. He appointed the first bishop of the Apostolic Vicar, Msgr Hong Yong-ho, although he had been missing for more than 12 years.
The note from the 1st of July that the Diocese of Pyongyang is now officially vacant and Bishop Hong Yong-ho is considered dead, but it has nothing to do with the fact that the Vatican has considered the "drama" of the North Korean Catholics completed. Nothing has changed in the Kim family dictatorship. Although in 1994 the "Eternal President" had died, Heads of State and regime founder, Kim Il-sung, and in 2011, his son Kim Jong-il, then also the grandson of "eternal president" Kim Jong-un, holds to the Stalinist state doctrine.

The main reason for the change in the Yearbook was the request of the South Korean bishops, the martyr-bishop Hong Yong-Ho and 80 companions are to be beatified ( see separate report ). To initiate such a process requires the Nihil Obstat of the Congregation of Saints in Rome. Such can not be issued, as long as a person is not dead. With the recent change in the Yearbook opens the way for the initiation of the procedure. In North Korea, since 1949, there are no priests and no church hierarchy any more. The Vatican appoints South Korean bishops as apostolic administrators for all bishoprics. But they do not have access to their North Korean dioceses. Korea is separated by the Iron Curtain that divided Germany as it was until 1989.

While the Catholic Church in South Korea has experienced tremendous growth for decades, it was wiped out in North Korea. Officially there were 55,000 Catholics before 1949 in the North of the country. Until recently, the number of Catholics today was estimated at a few hundred. Even the official figures of the regime fluctuate. Recently it showed the "democratic centralism," a hitherto unsuspected interest in the figures of religious minorities. The regime wants to counter the criticism that they systematically violate human rights. In any case, the number of Catholics grew from 200 to 800 officially and finally even to 3,000. In Catholic circles in South Korea, it is assumed that there are approximately 10,000 underground Catholics in North Korea. There is no priest in the country. Lately a priests travels occasionally, when the political climate makes it possible and it's allowed by the regime, that Catholic priests from South Korea drive to Pyongyang to celebrate the Holy Mass in the only officially existing church. In 1949 all churches in the country were destroyed. It was not until 1988, when South Korea's Olympic Games were held, that North Korea built a church "overnight" in order to burnish their image a little.

Only 800 Catholics are officially registered and recognized by the regime, although the regime has acknowledged even in recent pronouncements to the international community the existence of 3000 Catholics. The church is managed by an administration obedient to the regime that is not affiliated with the Holy See. The Chairman is the layman Jang Jae-on, the president of the Red Cross of North Korea until recently.

On the 27th of July the division of Korea was marked for the 60th Time. The bishops of the country initiated a peace march, led and called on Catholics to pray for the reunification along the demarcation line. With the martyr Bishop Francis Hong Yong-Ho and his companions, they may soon be officially recognized advocates in heaven.