Edit: this has been ongoing for years in the German press, and it looks like it may be getting some traction at last.  Alice Schwarzer is a well-known German feminist who's putting aside the loyalties you might expect of such a person to attack real evil.

Keep the Greens away from children! 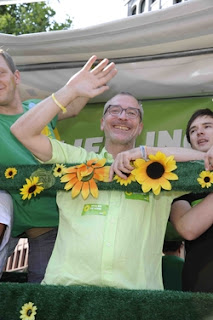 BERLIN. In the debate about the pedophilia entanglements of the Greens, feminist Alice Schwarzer has attacked the parliamentary secretary of the Greens in the Bundestag Volker Beck. Beck could not retire at the mercy of late birth, Black wrote in an article for the taz.

"He was active in his mid-eighties in the SchwuP (Federal Association of Gays, Transsexuals and Pederasts) and had been there 'once or twice', he says today. The SchwuP was the spearhead in the fight for the liberalization of pedophilia. Beck even called in a 1988 text, for the decriminalization of paedosexuality," stressed the journalist.

Today, Beck considers prostitution a profession like any other. Beck said: "If people offer something that others want to buy and there are no environmental or social side effects that you have to urgently prevent, then I'll take note of that and do not disturb me any more."

According to Black, the parallels are imposed in the discourse surrounding pedophilia and prostitution over normal. "Even today more than 90 percent of those in poverty and forced into prostitution in Germany are denied, and 'consensuality' and 'voluntary' are the concerns.

An article appeared in 1988 in the book "The pedosexual complex" under Beck's name, in which the author himself spoke for the "decriminalization of paedosexuality". Beck today maintaints that the article had been published without his authorization and altered.

The original version of his original text, however, has never been published until today. The Green politician does not wish to answer JUNGE FREIHEIT's questions. Neither, as it appeared in the article, nor exactly at what points the editor had changed his post. An employee merely referred to an opinion on Beck's website.

There, writes the German parliamentrian, according to his memory the "legal department of the Green Faktion then proceeded against publisher and / or editor". The distribution of the book was not able to be prevented, but a new edition of the work with the article had been prohibited. He unfortunately had no documents from the time unfortunately. It annoyed him, Beck said, that he had not kept the manuscript.

Beck's memories are, however, one thing. He also writes on his website, "never" had a board of Federal Green Party promoted legalizing sex with children or "agreed to something, which was even remotely in that direction."

This was vehemently contradicted on Tuesday by the Göttingen social scientist Stephan Klecha. "Here, Beck is clearly wrong," he told Bild News. There had been five decisions of the Greens Federal and State elections, in which they called for the abolition of the corresponding penal clause.

"In the 1985 state election in North Rhine Westphalia, this decision has even cost the party its entrance into parliament. Many were clearly blocked. On the topic of sex with children, the collective memory of the Greens doesn't seem to work well."

Klecha belongs to the research group of the Göttingen political scientist Franz Walter, to investigate the involvement of the party with the pedophile scene on behalf of the Greens. On Monday was it known that the Greens had already advocated in its first policy statement in 1980 for a broad legalization of sexual relationships of adults with children and wards. (Krk) 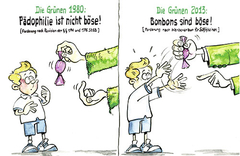