Franciscans of the Immaculata: An Order of Angels and a Few Demons 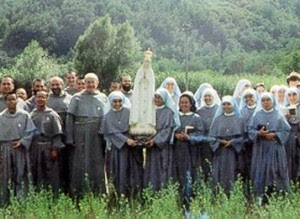 Angel Dressed in the Mantle of Mary, Casts out Demons

I am indebted. In debt to the Franciscan Friars of the Immaculate. I will not repay this, because then I would have to stop, yes, being grateful to them. But I want to testify. I want to bear witness to the closeness and devotion for this order of angels, who must live among some demons.

Florence, Church of All Saints. It is the first day of the year, a few years ago ... My future wife at that time and I entered this great church for Holy Mass. At the end of the church, the last church pews, a mild-mannered brother is in the blue habit. I ask him to hear my confession. What kind of inner peace, such purity, such strengthening in this confession. A few years later I would learn that this mild-mannered brother was none other than Father Serafino Lanzetta, who is opposed by the bloated demons because of his honest analysis and interpretation of the Council.

Florence, Church of All Saints. An indeterminate day in 2011. A delicious conversation with a black sister who gave Miraculous Medals at the monastery gate. I will never forget the peace of mind and the joy that could be heard in her voice. And they told me that it is important to pray for our priests. Today I'm aware that it would also have been useful to pray that some demon leaves the Order.

Avellino. An indefinite day several years ago. I am eating pizza with friends. At the table across from me sits Monsignor Vito Angelo Todisco, the Apostolic Visitor of the Franciscans of the Immaculate. I can still hear him talking about the Franciscans of the Immaculate playing the sly one, "Yes, if you're going to Frigento, then you will hear them scream from one room to another, those who flagellate themselves ... yes ... because then you have to go away ..." At that time, to be honest, when I heard from one dressed with cap and civilian clothes as was this priest, I had not understood if he was laughing or whether it was a very special form of admiration, an admiration for what "we mortals" never do, would never be able to do ... Now I know that it was only a mockery of the brothers and for their spiritual destruction.

Battipaglia, 2009. Invitation to an exhibition by Cardinal Castrillon Hoyos. We, Manuel Grillo, my publisher and friend, and I went out with the intention, to pass to the Cardinal an appeal to the Pope for religious art, that he would send him to the Holy Father (as it then also happened). The altar service at this Pontifical Mass was celebrated by the Franciscans of the Immaculate. After completion of the Mass, I was moved to greet these industrious brothers, these really humble brethren, and not a rehearsed, false, intellectual humility. No, they are humble because they quietly do their job, all in the same way with the same dedication, the triumph of the Immaculate Heart of Mary. Suddenly, just before they again set off towards Frigento by bus, one of them turned, a bit bald and the beard of a Capuchin, towards me and said, "You are Francesco Colafemmina!" It was Father Paolo Siano, the Mason Hunter ...

And who knows if this it is not just these Freemasons who are behind the whole affair ... But I would not appear to be a conspiracy theorist or a simpleton.

The whole thing is in any case based on a question of style. I have met no Franciscans of the Immaculate that would have put themselves in any way in a picture with the Pope or a scene that have been published more than once or many times in various institutional Facebook profiles, their photos with the Pope - the new Pope of course - before this or that background, the WYD hat, with young people of WYD, etc., etc. Well and good, but if this is the case for any of them yet, he is one of the authors of this dark intrigue, which led to the overthrow of the Order. Then I ask: Why? Why did you go then, instead of protecting and blessing the Order in silence and devotion? Why did you leave, while your founding father is forced from his creation of love and devotion to Christ and the Virgin Mary, laughing through the streets? [He evidently has someone in mind]

. Spiritual worldliness. This is evil. The evil of which Pope Francis speaks!

"We mean with this that which constitutes virtually a flow of otherworldliness, whose moral ideal, however, is meant the spiritual, rather than the glorification of the Lord, but those of man and his perfection. A radically anthropocentric attitude, which is the spirit of worldliness." said De Lubac. So I want to thank the Franciscans of the Immaculate Conception for the spiritual gifts they have given me. I want to thank them for their simplicity, their unselfishness, their devotion, I want to thank them, because they have shown that it is possible, even in the bewildered and seductive world of today, to live a life completely given to Our Lord in freedom. It is no coincidence that I was able to see a clean alternative to the corruption of other brothers in them, such as some of the Capuchin Friars of St. Pio, who have become the best example of secularism, a secularism tout cour. [...]

At this point I would like the many brothers who read me, saying, obey, yes, but do not give up. Envy, arrogance and pride destroy in a few minutes the works of many years. You have the power to rebuild everything, and more, a force that belongs to you from the Lord. Therefore give evidence, give wise testimony, looking for new ways for witness. Show also those who want to see you today in chains, that is no fault in you. Fighting a brilliant fight, which is not ideological, concerns not the Old or the New Rite, the Council or the post-Conciliar period, but the Faith in our Lord and to follow Christ. May God bless you, dear sisters and brothers. Angels dressed in the mantle of Mary, cast out demons who have mingled with you! [...]

NB: Colafemmina is not a Traditionalist.
Tancred at 11:48 PM
Share