(Brasilia) Shortly before the visit by Pope Francis for World Youth Day in Brazil a liturgical scandal has erupted in the Latin American country. The Archbishop of Cuiabá, Milton Antonio dos Santos, has forbidden the faithful from receiving Communion kneeling in a magisterial letter to his archdiocese. The Real Presence of Christ was never mentioned Archbishop dos Santos in his encyclical of 11 July. Never that the Eucharist is truly the Word of God incarnate.

Prohibiting because of "unity"

The Archbishop explains his "instruction" to the "unity of the community." The Archbishop saw this threatened by Communion on the tongue kneeling. 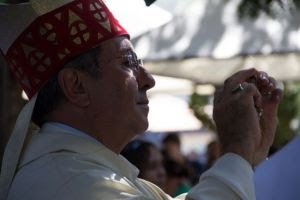 "The real fault lays with John Paul II, who appointed him Bishop of Corumba inthe Brazilian state of Mato Grosso do Sul in 2000 and in 2003 promoted him to Coadjutor Archbishop of Cuiba with right of succession, where he became Archbishop in 2004", said the Church historian and Catholic blogger Francisco de la Cigoña. Dos Santos had been installed as bishop a few days before the resignation of the Brazilian Cardinal Lucas Moreira Neves, Prefect of the Congregation for Bishops.

The Brazilian Supreme Pastor embarks on thin ice with his ban and his justification. In his letter he refers to the instruction Eucharisticum Mysterium of the then Congregation of Rites in 1967. The doctrinal statements made ​​since then he ignored.

While kneeling Communion is always allowed, the standing may be additionally allowed by the competent Episcopal Conference. Both the introduction to the Roman Missal and the instruction Redemptionis Sacramentum from 2002, speak for themselves. In a letter from the Congregation for Divine Worship to a diocesan bishop, 1322/02/L protocol , from the 1st of July 2002, set forth the doctrinal and canonical bases. 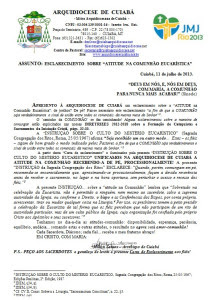 The Conciliar Constitution Sacrosanctum Concilium notes in point 22, paragraph 3, that no one is permitted to add anything in the liturgy on his own, omit or modify. According to Sacrosanctum Concilium, No. 22, paragraph 1, the sole responsibility for the Liturgy falls to the Holy See, who is also the sole legitimate legislator. Canon 838, Paragraph 1 of canon law repeats this principle of law.

Interesting in this context that the Archdiocese Ciuabá in 2012, conducted an opinion poll in which he asked the believers specifically, whether they received Communion kneeling on the tongue. 57.3 percent of the Faithful answered yes. Conduct that. This has been expressly connected with the imitation of the model of Pope Benedict XVI.

The letter from the Archbishop was initially set on the website of the Archdiocese. A few hours after the publication of an article in the traditional we site Frates in Unum on the 13th of July it was removed. Fratres in Unum called on the faithful of the Archdiocese to protest against the illegal ban of the Archbishop to the Congregation for Divine Worship in Rome and the Apostolic Nunciature in Brazil. In the Archbishop's palace there were immediately numerous protests received, so that the Archbishop took to retreat. On Tuesday, a corrected version of the letter of Archbishop Dos Santos has been published. "As is usual for Brazilian bishops, it admitted no fault, but, more precisely, "as Fratres in Unum commented on the change. In the new version, the Archbishop explained that it is every believer's right to receive Holy Communion free standing or kneeling, and he "never" would "oblige" someone to receive [Calvinist] hand Communion.

It is theologically incorrect (and probably a heresy) to say that the eucharist is the incarnate word of god. The doctrine of the real presence says it is the body, blood, soul and divinity of Christ not that it is a physical presence.

Fr. David, could you explain further, please? I had always been taught that Body and Blood was indeed the physical presence of Our Lord; Soul and Divinity the spiritual presence. Christ entire, all indivisible.

"The Word was made flesh and dwelt amongst us"

Dear "Fr David theologian" who doesn't offer credentials and does not even put a capital "G" on God,

Blood is physical. Flesh is physical. Eucharistic miracles test out with DNA from blood and the Host tests out as heart tissue. That blood and flesh belongs to Jesus. The Incarnate Word is Jesus Christ. What's the prob?

And please be respectful when speaking of the Second Person of the Holy Trinity and put capital letters on the words God, Incarnate Word, Eucharist, Real Presence.

Of course It's the Real Physical Presence of Our Lord...that is Catholicism 101. I would refer this sham theologian to a real theologian, Fr. Leonard Feeney, who wrote a magnificent little booklet titled "The Eucharist in Four Simple Mysteries".

If that won't do, I suggest some other notables like St. Thomas Aquinas, St. Justin Martyr, and St. Irenaeus for a start.

Seriously, I am SO sick and tired of the heretical idiots.

Did I ever mention how hot it is down here?

For "the sake of unity" why doesn't the Bishop instruct all to receive kneeling, and on the tongue?

Yes indeed. I would like the Bishop to answer this question.

Quoted from above: "The retraction after protests - 57 percent of the faithful receive Communion Kneeling on the Tongue."

The dexterity required for this form of reception would be noteworthy--similarily, the accompanying pain excruciating.

I do it everyday...52 years old...bad knees...I don't hold up the line a bit. With a little practice it becomes one simple move, even with a skirt on. You oughta try it sometime.

Pope Paul VI seemed to have no problem with the word "physical".

For what now lies beneath the aforementioned species is not what was there before, but something completely different; and not just in the estimation of Church belief but in reality, since once the substance or nature of the bread and wine has been changed into the body and blood of Christ, nothing remains of the bread and the wine except for the species—beneath which Christ is present whole and entire in His +physical "reality,"+ corporeally present, although not in the manner in which bodies are in a place. (from Mysterium Fidei 46, crosses added)