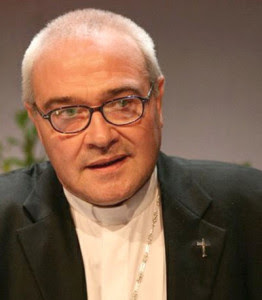 (Rome) Archbishop Luigi Negri of Ferrara warns of the proposed law against homophobia. The bill recalls fascism and the "dark times of state ideology." In all European countries there are attempts to limit religious and free speech rights on behalf of alleged "protection" of and "discrimination" against homosexuals [aberrosexuals]. There is no broad discussion of the introduction of the new law. All are apathetic. The Christians must defend themselves and take up the fight for freedom of expression and freedom of religion, otherwise there may be sudden and bad awakening. The negative consequences are already visible in the UK and France. "The priests and bishops, who quote St. Paul in Holy Mass, could be charged," Archbishop Negri told the weekly magazine Tempi.

"In defending a certain lifestyle and its supporters, but especially those who theoretically confess homosexuality and practice it in society, the state discriminates in a serious and irreparable manner against other opinions and lifestyles," said the Archbishop, as Pope Benedict XVI. had personally called upon the 2012 Synod of Bishops.

The law against homophobia, for which there is no objective necessity and that will soon be discussed by Parliament, will introduce, after "70 years since end of fascism a thought crime, and awakes dark, long subdued and times always believed to be over, back to life. Times in which the State identified ideological positions which it forcibly introduced and sacrificed all opinons which did not quite match."

"Whoever will continue to draw attention to the great heterosexual tradition of the West, which can be found in the Magisterium of the Catholic Church and in the practice of the Christian life through so many centuries, a great and informative powerful testimony, is in danger of being persecuted, if he expresses his beliefs publicly," said the Archbishop. "The priests and the bishops who quote excerpts from Paul's Epistles during the public liturgical celebrations, which relate to the moral standards on gay [aberrosexual] positions, or recite from the Catechism of the Catholic Church or quote parts of the Church's social doctrine, could be brought to the authorities," warned Archbishop Negri.

Christianity, says Negri, should not forget what Pope John Paul II asked in the encyclical Centesimus Annus: always to defend freedom. Because "every time we strive to secure our freedom, we defend the freedom of all, and every time we lose our freedom or it is limited, it is lost or restricted for all," said Negri.

"Over the past three years, more than 100,000 Christians have been killed because of disregard for the freedom of conscience, and in almost all countries of the world. Is it possible that the 'defense of homosexuality' is in comparison, more important than this specific problem and more important than the freedom of conscience?" said Luigi Negri, the Archbishop of Ferrara-Comacchio.