Will Catholic Church be Sold to Freemasons? -- Vierzon: Instead of Muslims, Freemasons? 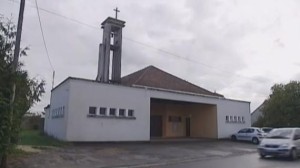 Edit: the church doesn’t look like it will require much renovation to become a Lodge.  She’s a bewt!  Unlike the United States, the local people are actually concerned that their church, which could have been purchased by a Catholic religious order, is likely going to be sold to Freemasons.

(Paris) The Catholic Church Saint Eloi in Vierzon was sold as the responsible Pastor, Alain Krauth, confirmed. To whom it was sold, the priest does not want to make known.

In October 2012 Pastor Krauth had announced that pastoral care team, pastoral council and parish finance committee had agreed to sell Vierzon, which belongs to the parish church of St Eloi. The beautiful church dates from 1950 and is located in a district which declining Catholics and Muslims increasingly share. An Islamic community was also the first prospective for the purchase of the church, to convert it into a mosque. Pastor Krauth had no objection to such a sale. Because it was time, said Abbé Krauth, to "forget about" the conflicts of the past. [Are they really in the past, considering the last 5 years, especially?] Today it is about "social justice" and "mutual understanding," said the priest in a press release that was distributed by the competent press office of the Archdiocese of Bourges. Krauth defended his position  by referring to  the Second Vatican Council and the Assisi meeting of 1986. The only concern of the pastor is to "prevent" that the Church “is not sold” to a community or group  "with radical ideas, no matter to what religion they belong” .
The secrecy is a source of speculation, which received new sustenance  by an article in the daily newspaper Le Berry Republicain.  The newspaper wrote: "A Communist mayor who buys a church in order to resell them to a Masonic Lodge is truly an exceptional scenario."
In the new parish paper, the diocese of Bourges confirmed the sale of the Church only with the simple words:  "The time has come to part with it."  The name of the buyer was not disclosed. The last Holy Mass is, according to Parish Journal, celebrated in the church on the 22nd of June.
When asked by Le Berry Republicain Patrick Lemaréchal, the financial officer of the diocese, confirmed that the church was sold to the community of Vierzon. The city has a right of first refusal and was interested in the construction of a multipurpose hall, said the Finance Officer.
The excitement in the previous year about a possible purchase by the Muslims and the conversion into a mosque died down after the interested Muslim group had withdrawn their offer.
Since then, a Catholic group showed interest in buying the church, to keep them in Christian hands. It is the Confrerie de Saint Eloi , which is  active mainly in France, Belgium and the Rhineland. The newspaper writes of an "obscure brotherhood" that is collecting the money to maintain the church. In contrast, Pastor Krauth was up in arms, fearing that it could be a traditionalist or right-wing group. Olivier Bidou, the deputy chairman of the Brotherhood declined to comment.
In April, Communist-run government of the 30,000-inhabitant city decided in the interest of the “communal amity,” to buy the church, to smooth the tensions associated with the sale.
Mayor Nicolas Sansu, projecting a list of a leftist candidates, even declared that  "no purchase agreement has been signed." He also announced that the city had a potential buyer for the church. You just waiting for the meeting with the Archbishop to discuss the purchase.
The opposition is skeptical.  It suspects that behind the "potential buyer” is the local Masonic Lodge Amis de la liberté of the Grand Orient of France from the Rue Marcel-Etiennne. The person sitting one the Council who is a Freemason is said to have arranged the matter. The mayor has, maintains the opposition, a close contact with the Lodge of Vierzon in recent months. The lodge is on the search for a new headquarters for their temple. Even the church of Saint Eloi seems to be an option.
The mayor is excited about the media interest. Le Berry Republicain quoted him as saying: “they can talk about Freemasonry all they want, but for the moment nothing is certain and nothing is decided yet."
At the Grand Orient, it means you know nothing. The Grand Lodge stresses that “there is nothing illegal about the possibility that Freemasons buy a public building."
In the next few days some decisions will be made and then the public will have to be informed in detail about the sale and the buyer.
Text: Giuseppe Nardi
Image: Confrerie de Saint Eli