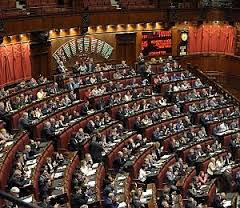 Edit: do the Turkish people know what their politicians are up to? Ironically, the Italians signed this document on the day before Constantinople fell to the Turks in 1453.

(Rome), the Italian Parliament has ratified the Council of Europe Convention on preventing and combating violence against women and domestic violence on May 28th, better known as the Convention of Istanbul. The convention  has been signed by 24 European countries on the 11th of May, 2011, including Germany and Austria. The Convention has so far only been ratified by Turkey, Albania, Montenegro, Portugal.

In 81 articles, the Convention served the language of gender ideology. An ideology that used common words, but means something else. My goal is the abolition of the natural sex of man and woman. To cancel the two natural genders, many "genders" will be constructed. A natural given gender is rejected. A man is not by nature a man or woman, but only by reason of his will. The individual decides whether he is straight. A self-designation, which can change as needed, and the legislature and the community have fo kindly accept without protest. Otherwise discrimination would exist.

The woman is therefore in the confused language of the Convention, not an equal legal person, because she is a person, but because she is of the female sex. The applicable legal system, the equality of all persons before the law is broken in the name of equality. The woman becomes a kind of protected category that requires special ad hoc rules to ensure her "equality", but certainly to attempt to overcome the natural gender order of husband and wife. Womanhood is to overcome the biological womanhood.

The gender emphasis reveals the underlying intention of adding more "protected categories" such as homosexuals or transgender, and thus sexual preferences under the covers, including the perversity that everything possible, but certainly it does not constitute a state agenda, to raise it the institutional level and to promote.

Italy, with five states have ratified the treaty. So in order to be put in effect, it requires at least ten states to ratify. Will Germany and Austria follow?

If it is, it’s not very funny.