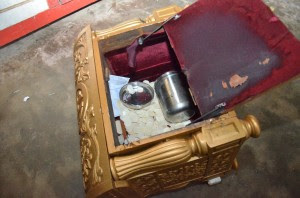 (Colombo) A group of Buddhists devastated the Catholic Church of St. Francis Xavier in Angulana, in the Archdiocese of Colombo in Sri Lanka. The vandals smashed a 143 year old statue of Mary. However, their goal was the Blessed Sacrament. The perpetrators tore the tabernacle with the Blessed Sacrament from the altar, broke it up and set it on fire. According to police, at least 30 liters of kerosene were poured over the tabernacle, to put it on fire. However, by some miracle the consecrated Hosts did not burn in the tabernacle which was damaged but remained intact.

When the sacristan discovered the vandalism, he rang the church bells, so that the faithful flocked together. The Catholics of the Archdiocese of Colombo are shocked by the incident.

Many look to the integrity of the consecrated hosts as a miraculous intervention. A Eucharistic miracle, which should demonstrate the power of God, and shame the attacker, as it happened in Lanciano, Bolsena and many other places over the past 2000 years? "A great miracle has happened, mediated by Jesus in our country and it will give the attackers a message: No one can destroy Christ and His love. No one can harm Him," were the quoted voices of local Catholics by Asianews.

Pastor Christo Viraj Fernando and his chaplain Kasun Fernando condemned the violence. At the same time, they called on the faithful to remain calm, to thank God for the wonderful integrity of the consecrated Hosts to pray for the conversion of the perpetrators and to forgive them.

Cardinal Albert Malcolm Ranjith, Archbishop of Colombo has initiated investigations. The intact Hosts were brought to safety in order to allow the police, but also the church to inspect them. The Cardinal will perform the reconsecration as competent bishop for a church desecration according to church canons, before the church can be reopened for worship.

The incident occurred on 5 June at about 10 clock in the evening. Initially, Buddhist extremists were thought of as they have attacked Christians for months in Sri Lanka, but it may also be an attack from the Islamic minority. The attacks usually are a result of Buddhist extremist organizations Bodu Bala Sena and Sinhala Ravaya. A new phenomenon, the police and the public are faced with new challenges. Previously religiously motivated violence were a rarity on the island.

On Monday, the police arrested four teenagers. They are said to have done the deed while intoxicated. The facts did not correspond to the first suggestion, that there were two Buddhists and two Catholic perpetrators. According to police, all four perpetrators were Buddhists. Cardinal Ranjith has shown them the spirit of Christian love in public, such as the Sunday Times reported from Sri Lanka.