Fatima and the Third Secret -- Why is Pope Francis Having the 97 Year Old Secretary of John XXIII Come to Rome? 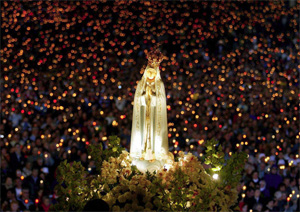 (Rome) Is there a Marian reading of recent church events? Antonio Socci focuses on this question in the news daily Libero (April 14). Pope Benedict XVI., who sees his powers dwindling  and does not feel strong enough to face the challenges of the time announced his resignation on the 11th February, taking place on the feast of Our Lady of Lourdes,.
His successor, Francis is elected on March 13 , a date that commemorates the apparitions of Fatima. In the small Portuguese city, the Mother of God appeared between the 13th of May and 13th of October on the 13th of each month before three children. The 13th Day of each month is Fatima Day in  Catholic piety  and thus is a Marian date.
Sister Lucia of the Immaculate Heart,  which was the religious name of one of the children, wrote down the Third Secret of Fatima in 1944 after much reluctance. Only when she was stopped from writing expressly by her bishop, she got the call. The minutes were kept by the Bishop of Leiria, since 1957 and they are located in the archives of the Congregation for Doctrine and the Faith in Rome. Each newly elected Pope is shown the content of the the Third Secret by the time of his inauguration.  Only in 2000, did Pope John Paul II  order the publication of the secret to counteract speculation about a near end of the world or a third world war.
Much has been puzzled about the Third Secret of Fatima, about "a Bishop dressed in White”, which was written of by the Sister Lucia dos Santos, one of the three seers: "We had the idea that it was the Holy Father.”
Pope John Paul II referred to the prophecy when he and the then Secretary of the Congregation, now the Cardinal Secretary of State, Tarcisio Bertone, made to reveal the third secret in the Holy Year in 2000 by the then Prefect of the Congregation of the Faith, Cardinal Joseph Ratzinger. In the belief, which was granted to the shepherd children by Our Lady, they saw that the white-robed Bishop is killed by soldiers. In 1981, a few months after the assassination attempt on John Paul II by the Soviet hired assassin Ali Agca, Cardinal Ratzinger, the previous Prefect of the CDF, Franjo Cardinal Seper, had made a connection between the vision and  the Pope surviving the severe injuries inflicted by the attack . The attack was on May 13th was committed on the day of Fatima. The Pope ascribed his salvation to the Mother of God.
Early on, however, there were doubts whether the publication was complete. Due to past testimony of several top church officials, several lines seem to have continued to be kept secret. However, doubts were also placed on the interpretation. Among others, it was the Austrian Bishop Kurt Krenn of Sankt Pölten, who publicly reported a little later about such doubts of Joseph Ratzinger. The Prefect of the CDF had therefore been of the opinion that the prophecy was not referring to the assassination, but had a far greater dimension. One dimension that concerns the whole Church, as well as the popular intuition showing in the murder of the other bishops, priests and lay Catholics. So the Third Secret concerns future events that have yet to occur.
Recently, the question is raised whether the words referred to the resigned Pope or to his successor, who likes to call himself "Bishop of Rome".
Francis saw how Pope John Paul II had a special devotion to Mary. The Mother of God is Francis' first "escape" from the Vatican on the day after his election, when he went to venerate the icon in the Papal Basilica of Santa Maria Maggiore, and also prayed at the grave of Pope St. Pius V.  In his first Angelus in St. Peter's Square, he mentioned Fatima.  About two weeks ago  Pope Francis surprisingly called  Archbishop Loris Capovilla.  The now over 97 year old, retired Curial Archbishop was the first secretary of Pope John XXIII from 1958 to 1963.  On Easter Monday, the 1st of April, the phone rang. The Pope was personally at the other end and told Capovilla  he wanted to meet with him. The Monsignor promises soon to come to Rome, where he has not been any more since the beatification of John XXIII on 3 September 2000.
The reason it is said that the old prelate was to be placated, that  the Pope wanted to say thank you for a brochure that Monsignor Capovilla had written for the Year of Faith and Cardinal Comastri had given to the Pope. The Pope’s call merely to say thanks for a brochure was not convincing in the least for a set of Vatikanisten.
Capovilla was the last topic of conversation, because he talked about a memorandum that Benedict XVI. had written for his successor. The Vatican denied the allusion. At the meeting of the two Popes in Castel Gandolfo, in any case, a box full of documents and a large, sealed envelope was seen.
"Why has the Pope contrived to want to see  the former secretary of Pope Roncalli in the first month of his pontificate and at he exclusion of the public? What was so urgent?” asked Antonio Socci.
On the 7th of April the Patriarch of Lisbon, Cardinal Jose Policarpo of the Portuguese Episcopal Conference, of which he is chairman, announced that Pope Francis had asked the patriarch to consecrate his pontificate of Our Lady of Fatima. The consecration will be on 13 May, taking place on the 96th Anniversary of the apparition.
Is Pope Francis talking with Archbishop Capovilla about the Third Secret of Fatima? He, therefore, is making him come to Rome, as the timing of the announcement made shortly after he consecrated  as his pontificate to Our Lady of Fatima suggests? What does the Pope think or know related to the prophecy and the future of the Church? What must we expect?
Text: Martha Weinzl
Picture: Fatima
Translation: Tancred
Link to Katholisches…