Cabbalistic-Occult Rituals in a Catholic Retreat House in Buenos Aires 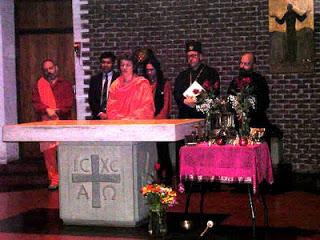 Edit: this was posted earlier. It’s a report from the site Pagina Catolica.  We still don’t think anything has been done.  This is the article as it appeared on January 28th 2012.

(Buenos Aires) In various Argentine retreat houses, Catholic religious communities may offer Magic Seminars, in which occult teachings are introduced. Here are "alchemistical and cabbalistic rituals" which even yet profane the chapels and altars of the retreat houses.

The most recent incident took place last weekend in the Contemplative House of St. Francis of Assisi of the Capuchins in the Diocese by the same name in the Province of Buenos Aires. From the 24th to the 27th of January was "Maga Hania & Conspiradores" in the retreat house "in accion". An equivalent of 420 Euro allows those interested to be introduced to the "cabbalistic rosary" and "alchemistical novenas", in order to become acquainted with the "Alchemy of Love" and the occult secrets of the attractivenss of "Venus Aphrodite”.

The seminar program also included a "magian night ritual" in the "clothing of Aphrodite" in the swimming pool of the contemplative house, in order to obtain the "energetic controls" of the "currents of magnetic love". All of this are naturally for the "enlightenment of the world and of people”.