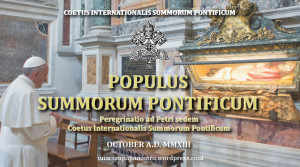 (Rome) The Coetus Internationalis Summorum Pontificum (CISP) organized in 2013 an international pilgrimage of tradition Ad Petri Sedem to Rome. After the fruitful success of the first international pilgrimage, the "Populus Summorum Pontificum will again return to Rome in order to make the eternal youth and beauty of the traditional liturgy shine at the grave of the Apostles Peter". As in 2012 the first pilgrimage will reach its solemn climax again in a Pontifical High Mass in St. Peter's Basilica.

The 2nd International pilgrimage will take place from the 24th to 27th of October 2013 for the conclusion of Pope Benedict XVI.’s Year of Faith. Cardinal Angelo Comastri, archpriest of St. Peter's, confirmed on 14 March, on Saturday, that the tradition associated pilgrims can celebrate on the 26th of October at 11 clock in the Papal Basilica over the grave of the holy Apostle Peter, the Holy Mass in the Extraordinary Form of the Roman Rite.

Coetus Internationalis of Summorum Pontificum, which have different associations to Ecclesia Dei about the organization of the International Una Voce performed the pilgrimage collaborated together in 2012, to participate "in the establishment of the universal Church under the guidance of the Holy Spirit." The Coetus Internationalis accepted the invitation of Cardinal Antonio Canizares Lovera, Prefect of the Congregation for Divine Worship and the Discipline of the Sacraments. At the end of the third he November 2012 celebrated the first International Pilgrimage Pontifikalamtes the Tridentine rite, he called on the organizers' seguir adelante ", to continue on this path.

The July 2012 resulting Coetus Internationalis Summorum Pontificum is led by a committee. The President is Guido Capoccia, he succeeds Riccardo Turrini Vita in this role on the 31st December, was appointed a judge of the Court of Appeal was of the Vatican State, Secretary General remains Guillaume Ferluc and the spiritual assistant Abbé Claude Barthe.