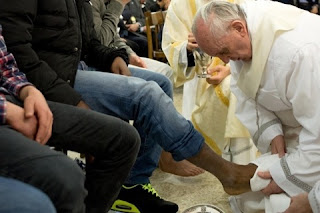 The Mandatum ritual is not a '50s novelty. The novelty was its incorporation into in the Maundy Thursday mass (as was the creation of a separate Chrism Mass for the consecration of the Holy Oils, which formerly occurred during the bishop's celebration of this mass).

The Mandatum itself is an ancient ceremony. Indeed, "Maundy" Thursday gets its English name from the ritual. Traditionally, the thirteen (see below) clerics could be, and often were, substituted by poor men (but still always men). Many Catholic princes imitated the practice, too. The Austrian and Spanish monarchs did so even into the 20th century. Even now, the non-Catholic queen of England distributes "Maundy money" to the poor, though the last English monarch to actually wash feet was the Catholic James II.

Though the prescribed number was originally twelve, from the Middle Ages until Pius XII, it was thirteen.

I love the headline and I could not have put it better my self.

Your lack of charity is incredible. "Trouble makers"? Pope Francis visited those in prison as commanded by Christ.

Did he also violate the rubrics out of charity?

I just wished it could be a trap they set for him and he accidently felt in to it. If he purposedly abused it (the liturgy)all the good efforts of Pope Bennedict XVI to fight against modernism so far would be going down to the drain and the Catholic church would be like a new Protestant church. Please, Holy Spirit saves the Church!

So the Pope should be above bringing charity and love to those who are most in need of conversion and repentance?

You’re assuming that charity and following the rubrics are mutually exclusive. I can’t imagine a more Un-Catholic thing to say.

I can think of many more actually un Catholic things to say to include labelling prisoners, of whom you have no idea of the state of their souls, as troublemakers