Mozetta Returns --- Was it All a Misunderstanding? 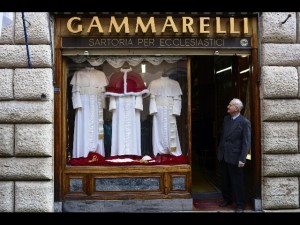 (Vatican) A bright red mozetta  was recently delivered to the Vatican by the Pontifical Household. It was ordered just this morning  in haste at the tailor Gammarelli in Rome.
Tomorrow morning there will be the solemn Pontifical Mass for the beginning of the Petrine ministry of the Bishop of Rome. An inauguration ceremony has replaced the usual once since John Paul I. 1978 replaced the usual  coronation of the Pope with the tiara. "In all probability, the only possible reason to explain the order is that  it will be worn by Pope Francis at the inauguration. It is believed that this will be at the tribute ceremony, where the Pope accepts "the promise obedience of the cardinals,” as Messa in Latino reported.

Papal Mozetta Hurriedly ordered and delivered in the Vatican

Will  the cover  combined with the choir dress of the pope back sooner than expected? Will its owner be the occupant of the Petrine Office?  Tomorrow we will have clarity. Pope Francis had the papal Mozetta that is not any piece of clothing, but a liturgical robe, rejected with rude words when master of ceremonies Monsignor Guido Marini tried to attire him for his first appearance after the Habemus Papam at the loggia of St. Peter's. The loud confrontation with Monsignor Marini was witnessed by many in attendance. The rejection by the Pope was all the more surprising to see, as the master of ceremonies only did his duty and Francis had worn the Mozetta since his episcopal ordination around 1992, including most recently, those of cardinals during the conclave in the Sistine Chapel. Was it all a misunderstanding in a highly emotional moment for the new Pope after his election?

Will Pope Francis wear tomorrow the vestment he rejected at his election?

Messa in Latino,  who was notified of a near dismissal of the Benedict XVI appointed  master of ceremonies, takes note with satisfaction that Monsignor Marini in any case will direct the inauguration ceremony and coordinate with the altar server Franciscans of La Verna who were summoned to Rome.
The Pontifical Ceremonies has with meticulous precision and dedication prepared everything in detail on the model and the provisions of Pope Benedict XVI. Lauds Regiae and the Pontifical Mass will be celebrated in Latin, the language of the Church. The readings, the Responsorial and the supplications are in different languages ​​including Arabic and Chinese. The Gospel is presented only in Greek, the language of the Church of the East, not in the sacral language, as Pope Benedict XVI. had introduced for solemn papal conventions. It seems to have been the desire to abbreviate the ceremony somewhat. With the same intent, the procession will account for the offertory.

Monsignor Marini XVI had prepared a solemn Pontifical Mass according to the specifications of Benedict.

For the Offertory,  the Sistine Chapel will sing the four voiced,  Palestrina motet Tu es Pastor Ovium which was specially composed for the 1585 coronation of the popes.
Monsignor Marini has compiled Latin / Italian / English program notes  for the inauguration, which was printed for the next day at the Vatican publishing house and will be given to all believers and the present leaders, the diplomatic corps and representatives of the Eastern churches, other denominations and religions . In the Eucharist, the Roman Eucharistic Prayer will be used. After the elevation of the Body and Blood of Christ is explicitly recorded that "the Holy Father kneel in adoration."

Pope will bow in adoration after elevation of the Body and Blood of Christ, the knee?

Pope Francis had in his two Masses in the Sistine Chapel in the parish of Santa Anna, and each made only one bow.
The Communion is kneeling on the tongue, as Pope Benedict XVI. had restored under the current rules of the Church. Pope Francis, however, has not as yet not participated in the Communion. In the Sistine Chapel and Santa Anna he gave Holy Communion, only to the two who were serving as deacons.

No Communion by the Pope

With the Te Deum sung, the liturgical part of the celebration closes.
Gammarelli Tailor is a traditional company, since 1798. Under the Blessed Pope Pius IX. it was in the papal tailor in the  19th. All of the robes of all popes since the Blessed John XXIII. were tailored by them.
Text: Giuseppe Nardi
Image: Messa in Latino

I wonder which assisting priest at this ceremony will give sacrilegious Communions to Joe Biden and Nancy Pelosi, two apostate Catholics and persecutors of the Catholic Church, who will undoubtedly present themselves for receiving the Eucharist, and thus incur at least part of the penalty for that unworthy Communion?

It is of course too much to hope that these two clowns will refrain from receiving, or if they do dare to present themselves be refused the Sacrament.

Reminds me of when Bill Clinton went to Communion.

I'm sure Bishop Wuerl will volunteer.

It will be good for the children to see the Pontiff wearing the familiar style that they learn about as children in history books or pictures from Rome. The Papal office and Pope can be Traditional and at the same time be redirecting attention to the less fortunate. This would be truly a novel idea. I bet no child or person in a poor area would not be thrilled to see the Holy Father. If he is wearing red shoes they will not refuse his words or kindness and in fact would greet him in a rather familiar fashion because of the recognition of certain trademarks of the Papacy. I know Pope Francis can restore all the lost or discarded elements and make them relevant with the same pastoral care and love that he could do without them. I would say go with them, and explain their purpose. Place the Mozetta on the shoulders of a child and watch his or her face light up. Yes, this is the way to go.

I fear scandal. Really they could be told beforehand to forgo presenting themselves at the alter.

I've visited some of my regularly visited sites. Some of my 'friends' are elated over the one Mozetta. I can certainly understand why but I hope this isn't the one and only thing we have to be happy for in the Pope Francis Church. I'm too trying to be hopeful but can't help to remember that 'one Mozetta does not a summer make'.

Agreed. But I'm so numb from all the scandals of sacrilegious Communions already that another one won't even matter. Between Niederauer giving Holy Communion to perverts in full drag queen attire, and the horror of Benedict XVI giving Communion to an obstinate Prot minister, and Wuerl with his demonic endorsement of Holy Communion for a Buddhist Lesbian...there isn't much that would shock me.

Well, there is one but it is best left unmentioned. Saint Michael the Archangel....!!!

I think the main point if the story was that Msr. Marini was going to be present and that most of what B16 wanted was actually done.