He'd already announced a year in advance in the Schwäbischen Zeitung: He will repeat the Carnival-falderal in the church of Ochsenhausen.

Dekan Schänzle is quoted: "A Fool's Mass will take place on 2013 in Fansets-Hochburg Ochsenhausen against. This will draw people who don't usually go to Church." (S.Z. 1.6.2012) It is well known that Holy Mass was mixed up with Carnival celebration from the film: The Fool's Mass of Ochsenhausen.

Very many pius.info readers have in the meantime have, thanks to the call for the bringing notice to this Liturgical abuse, weighed down the Ordinary of Rottenburg.

Actually, they received a standardized answer from the Liturgical Delegate, who despite seeing the Fasching marchers, costume communion and joke sermon, intervened here:

You have addressed our Diocese by using a form letter, which is placed on the home page of the Society of St. Pius X, and lodged a complain referring to Canon 1476 against Dean Schanzle.

A critical examination of the video, which has been offered on the site of the Society, that in the approximately five minute long selection, no violations were identified, which are covered in 172 and 173 of the Instruction Redemptionis Sacramentum.

Because there were no violations involving the named relevant paragraphs, there is no "possibility of an offense or an abuse against the Most Holy Eucharist", so that there won't be an inquiry introduced in the sense of Nr. 178 of the cited instruction.


The almost unimaginable statement: "Because there were no violations involving named paragraphs".

Here is the summary of what was to be seen in the short video:

The pastor entered with the Carnival horn music in the church, accompanied by the costumed ministers, he used the old fashioned ambo for a "sermon" in the style of a "fool's speech" to which he let the Radetzkymarsch play (citation: "Normal den Radeztkymarsch!"), then he threw roses to the crowd and at the end of his speech.  The ambo and the altar were adorned with carnival-like crooked picture frames, complete with the theme the "Mass": 'falls out of the frame'.  Costumed children with fool's caps walk directly to the altar in the sanctuary, while the pastor is dressed in a fool's cap.  Dean Schanzle tells amusing jokes from the altar, at which the gathered community laughed loudly, apposite that an old hymn was distorted:  "A house full of glory, that runs riot today,  really it's rumored otherwise that's a fool's house".  Then came the shameful "Costume Communion".  At the end the entire community linked arms in the church to a local Fasching hit "Ohu".

To all of this, Auxiliary Bishop Kreidler said "no relevant abuses could be affirmed"?

Have you, Excellency, actually read the texts of Vatican II in their entirety?  Is the instruction for the Liturgy today perhaps not valid any longer?  There it reads word for word:


3. Therefore no other person, even if he be a priest, may add, remove, or change anything in the liturgy on his own authority. (Decree on the Liturgy, Sacrosanctum Concilium 22:3)

Why is it that the Diocese of Rottenburg does not follow the prescriptions of the Second Vatican Council?

It appears that it will really only be possible to address complaints to Rome: on the formula for complaints. In English. 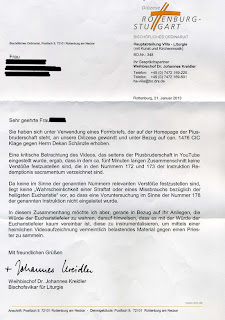