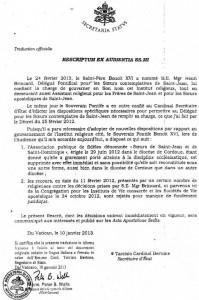 (Vatican)  The Secretary of State of the Holy See has announced in a decree of January 10, 2013 that Pope Benedict has abolished the association of the faithful with the name Sisters of St John and of St. Dominick.  This dealt with a dissident branch of the Johannites.  A part of the Soeurs contemplatives de Saint-Jean, the contemplative sisters of St. John, which is a branch of the Johannine Community, had separated themselves from the community.

The contemplative female branch of St. John was founded on the 8th December, 1982 by P. Marie-Dominique Philippe.  The Archbishop of Lyon established it on March 25th, 1994 as a Diocesan Congregation of Right.  It shoujld not be confused with the Apostolic Sisters of St. John, the other female branch of the Community of St. John.

In 2007 the contemplative sisters had 342 members, of which 98 had taken solemn vows and 134 temporary vows.  The order numbers 40 establishments in Europe, America, Africa and Asia.  In the German speaking areas there is one house in Marchegg in Austria.

The decree of dissolution proceeded from years of internal conflicts about the founding charism.  The Church's expected reforms were not accepted by part of the Sisters.  The conflict escalated and led to a break of a  part of the Sisters from the Order. Because of this, the cloister in Marchegg has stood empty since the summer of 2012.  The dissident sisters founded a new order in Spanish Cordoba with the name of the Sisters of St. John and St. Dominick.

On February 24th, 2012 Pope Benedict XVI named Bishop Henri Brincard as the Papal delegate for the sisters.  With that the Holy See undertook the direct leadership of the community.  Shortly after the Papal delegate reached his concluding report and was received by the Pope in a personal audience, Pope Benedict XVI dissolved the Sisters of Saint John and St. Dominick because of serious offenses against Church Order "with immediate effect".  The community may not then constitute itself in any new form.

The Johannine Community has published a statement on the decision of the Pope on January 25th:


Given the difficult situation, which is taking place with the community of the Contemplative Sisters of St John, inform you, about the brothers of St John, in accordance with the Superior General of the other two congregations of the family of St. John, that the Holy Father, which wants to preserve the unity of the family of St. John, in an audience transcript tells you that he has decided to dissolve the institution of the "Sisters of Saint John and the Saint Dominic," which was brought into life in June 2012 in Cordoba, Spain. Its members came mostly out of the community of contemplative sisters of St. John.

The Community of the Brothers of Saint John wants to affirm, through its Superior General, Father Thomas,  in humble obedience, its communion with the Holy Father. The Brothers of St. John in close community of contemplative sisters continue in their prayers. They invite the Oblates and friends of the community to work together with them to trust the Holy Father, united to the intercession of the Virgin Mary.