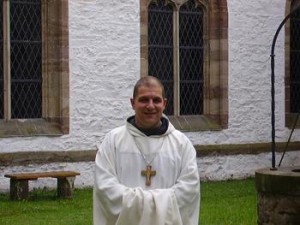 In 1963 Eberhard Vollberg was born in Frankfurt.  In December of 1986 he entered the Trappist Monastery of Mariawald.  He received the monastic name of Josef and studied theology and philosophy at the Austrian Cistercian Abbey of Heiligenkreuz near Vienna.  In June of 2006, he was ordained a priest and in November of the same year selected to be Abbot by the abbey's chapter. Under his leadership Mariawald undertook the task, in connection with the Motu Proprio Summorum Pontificum to use the traditional liturgical books.

Four years after this return to Tradition Paix Liturgique held an interview with Abbot Josef about this decision and its effect on the spiritual life of the Abbey.  The interview was in Brief 31 of the German edition of Pax Liturgique.

1) Could you say a few words about your Cloister, its history, its surroundings and its place in the Catholic world of Germany?

The Trappist Cloister of Mariawald is on the edge of the Eifel National Park, a distance of about 50 km south west of Cologne, a lonely place on the heights, surrounded by meadows and woods.  Its history began about the end of the 15th century with the growing interest in an miraculous painting, a Pieta.  In 1486 the Cistercians came here, in 1511 the Cloister church was consecrated.  The confusion of the French Revolution, just as much as the Kulturkampf and the Nazi-terror led to a gradualy dissolution and destruction, but the Mariawalder Cloister always restored itself like new.

Mariawald is the only Trappist Cloister in Germany.  The Trappists are monks of the renewal movement of the Cistercians in the 17th century, named after the Cloister of La Trappe.  The shortening of the order "OCSO" stands for Ordo Cisterciensium Strictoris Observantiae -- Cistercian Order of the Strict Observance.

In the Catholic wold of Germany Mariawald has lately taken a special place since the reform of 2008/09.  By a priviledge of the Holy Father, Pope Benedict XVI., the Abbey looked to the books of the liturgy in the Rite according to the books which were in use by the Cistercians in 1963.  Mariawald is following the Holy Father's wish when he was Prefect and since then, to protect against the amnesia toward the spiritual roots and the everywhere encroaching self-destruction of the heritage of a more than 1,500 year old tradition.  The way of Mariawald  is so far understood as service to the sanctity of the Church and Christians in the world.

The reaction of the Catholic public corresponds to farflung circles not to the will of the Holy Father;  all too often the reform is dismissed as reactionary and therefore rejected.  On the other side Mariawald is also accompanied by joyful agreement and gratitude, as among others to those faithful who come to the Sunday High Mass and shown by the significant inquiries after guest retreats.  Also mentionable is also the tolerance and respect of certain friendly neighboring relationships of various communities, some of which have honored  and revered the holy image of Mariawald --- a relationship which is unfortunately the exception up until now.

2)  Could you explain your motivations, to address the Motu Proprio "Summorum Pontificum" of 2008 and choose the extraordinary form of the Roman Rite for you Cloister?  How as the situation before?  Has your community suffered in the post-Conciliar crisis?

Fruits following on the Second Vatican Council  were not recognizable:  The Community had became significantly smaller.  Between 1965 and 2011 there were many departures and among the vocations, older men and only two vocations of younger, who proved their worth.  For that reason there was the desire, in stead of the anthorpocentric tendencies of the new orientation, to turn again to put God back in the center.  Just like a tree, which can only live from the power of its roots, so may the monk -- and not only him! -- fill in the wisdom of hundreds of years as a treasure, of himself and the Church again with youthful power.

It is still noticed that the Liturgy Mariawald is not completely identical with the Roman Rite, but has some particularities in its calendar, in the Liturgy of the Holy Mass and especially in the Office.

3) How has the choice changed your religious life?  What are the practical alterations in the Breviary, the Prayers of the Office, the Music education and Liturgical celebration and the Mass service?

The reform has made the spiritual lives of the monks more remarkable and strenuous.  The new "old" Liturgy has to be learned; the singing of Gregorian chant is an art, which requires special schooling; the care of the Latin as the required language of cultus requires eagerness to learn and industry; the prayers of the Breviary is a demand of more time, and the beginning of the hours at night at 3am really needs a preparedness to self denial.  All of the effort finds its own reward  in the experience of the threatened loss of wealth.

The altar service must also be learned, the visitors to the liturgy also must learn. The Latin liturgy versus deum instead of versus populum offers another and truly also deeper way of participatio actuosa.  Similarly, Communion on the tongue leads to the possibility of a conscious awe.  By the way, the Holy Father gives Holy Communion on the tongue according to the Novus Ordo -- and gives an example of his desired "Reform of the Reform".

4) What is the impact this has had on the lives of your community? On the relationship between the monks, on the spiritual life?

Forty years with the reformed liturgy has made a reorientation of course difficult, especially for the older brothers. Initial tensions have subsided, however, the situation has calmed down. The opening for the unabridged tradition, the intensification of the spiritual life, as we fervently hope, has born fruit, not least because of new vocations. This impatience is misplaced. To speak with the image of a friend of the monastery: The Company of the reform of Mariawald is like trying to turn an ocean liner traveling at full speed by 180 °. Both will not succeed immediately. Also Mariawald needs time - and the prayer of many.

5) What  stock can you take from this choice from today's perspective? You have shown an effect on vocations? How many monks have you today, how many were there in 2008?

If you're ask for an appraisal of this decision: I'd do it again - despite a number of  and somtimes subtle difficulties.

There were and are many candidates for admission to Mariawald, since the reform there have been about 40 to 50. But with the specific requirements of the strict rule almost all will leave. This reflects the general social phenomenon of our times. The escape from a lifelong relationship is reflected, too, in all the unmarried people cohabitating and the growing number of divorces. The inability to commit has probably burdened all orders and is not specific to our reform path.

In 2008 twelve monks were part of the convent, and of them, two have died in the meantime. Today, there are thus ten, including a brother who has recently taken perpetual vows - they're still showing the willingness to bond - and a newly recorded novice. Later this year, a postulant will be included, and there are two or three others seriously interested. Not to mention there are three external monks belonging to the monastery to Mariawald.

6) Do you get visited by priests from dioceses and other religious communities, who have the desire to discover the extraordinary form or to learn it?

Inquiries from priests to learn the celebration of the Usus Antiquior from us, are still coming, however, at first they were more common. With its limited manpower Mariawald can not afford this training.

7) It is obvious that at parish level, the "Reform of the Reform" of Benedict XVI, who wants to encourage more kneeling Communion, Gregorian Kyriale, Eucharistic Prayer in Latin, celebration to the East, altar crucifix, etc., is spreading slowly. Do you observe a Motu Proprio effect in your Trappist community?

A positive response to the request of the Holy Father, to bring tradition in the Novus Ordo is not visible. Rather, there is, as it seems a rigid denial and continued discrimination against the Holy Father and a clear disregard of such statements as the Council for Liturgy. Obedience and humility don't seem to be ideals.

In our monastic community, to respond briefly to your last question, in the course of the reform efforts, there is, if not an unconditional love of all tradition, acceptance has still grown. They really do love them, wanting no longer to do without them.