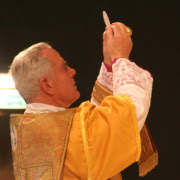 Edit: you would have heard it here first at least in English.


Rorate has learned and can confirm that Bishop Richard Williamson, one of the four bishops consecrated by Archbishop Marcel Lefebvre and co-consecrated by Bishop Antonio de Castro Mayer on June 30, 1988, in Écône, Switzerland, for the Society of Saint Pius X (FSSPX / SSPX) has been removed from membership in said society by its Superior General, and can now be considered a former member. The removal comes at the end of an internal procedure that included repeated entreaties by the higher authorities of the Society regarding Williamson's decisions and actions that apparently went unheeded.

Kreuz.net says he doesn't have the administrative abilities to really rebuild an alternative society.  The proof of that was probably to be had in the fact that the coup which he planned in the General Chapter at the end of August didn't go off as he'd hoped.

Depending on how things work out, he wouldn't be the last man to be kicked out of something he helped to build and sweated over, still, it's not the end of the world.  Who knows what tomorrow will bring?  After all, we just had a story recently about Father Barthe who is the Spiritual Director of the Traditional Pilgrimage to Rome who was himself a sedevacantist.

Whatever happens, you haven't seen the last of Bishop Williamson.

Kreuz.net, also has reported and acknowledges Rorate's information on the Bishop's expulsion fromt he Society.

The expulsion is the result of an internal investigation, which the authorities of the Society had over numerous times forbid his public comments.

The website 'lesalonbeige.blogs.com' reported this afternoon that the decision took place and was complete.

The official website of the Society has still not announced the expulsion.

It is uncertain if the Society has understood the theological significance of the expulsion of a Bishop. [Thanks to Novus Ordo Watch for the correction.]
Tancred at 10:50 AM
Share