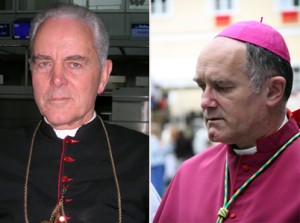 (Menzigen)  The break, indicated since October 2011 between Bishop Richard Williamson and the Society of St. Pius X has come to an end phase.  The General Superior of the Society of St. Pius X, Bernard Fellay, should have issued an ultimatum to his English colleague in the office of Bishop.  With the document he demanded that Msgr. Williason, within ten days, accept the legitimate authority of the General Superior.  This was reported by Andrea Tornielli.  Should Bishop Williamson continue to maintain his disobedience,separation would be the logical consequence.

Then the definitive moment of clarity took place, according to which Msgr. Williamson active in Brazil definitively against the will of the Society.

Because of Williamson's 2009 statements about the "Shoah", Rome was given observable stomach pains about a reconciliation with the Society and also to his recognition and acceptance as Bishop.  The exclusion of +Willaimson from the Society did not directly affect the reunification talks with Rome, but would certainly be taken with lightening toward recognition.   After that it became known that the other Bishops had written a severely critical letter against their General Superior and against unification with Rome, and  the Congregation of the Doctrine and the Faith explained that the position of Bishop Williamson, Tissier de Mallerais and de Gallereta would be handled independently in a possible unification.

For the General Superior of the Society, there the question in any case is not the mental state of Rome, rather the continued disobedience which Bishop Williamson shows to date.  The sedevacantist fringe of the Society has exerted a process of eroding on the Society for months.  In the USA there is in place a new type of "Society", which is now describing itself as the "true" Society of St. Pius X.  Its members insist that Msgr. Fellay is the legitimate successor of Archbishop Lefebvre,  whom they never the less refuse to obey, and who wish to enact in miniature, the situation between the Society and Rome.