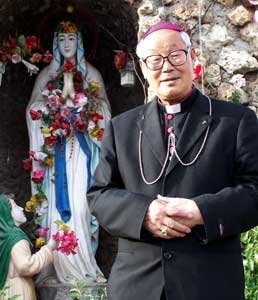 (Vatican) The Church int he Peoples' Republic of China is "living, true and devoted despite 50 years of persecution."  The Bishops' Synod began with this witness by the Chinese Bishops on Monday.  Msgr. Nikola Eterovic, the General Secretary of the Synod introduced the opening of the congress to the writings of Msgr. Lucas Li Jingeng, the Bishop of Fengxiang, who was refused participation in the Synod by the Communist Regime.  The 90 year old Bishop has spent more than 20 years in the concentration camps of the CCP.  After the Communist grab for power he was imprisoned, he was first released in the 70s with severe restrictions.

"I greet you who are able to participate in the Synod and venerate the tomb of St. Peter," wrote Bishop Li Jingfeng in his message. "It pains me very much that your voice could not be heard in the Chinese Church."  The Peking regime is now allowing the participation of any Bishop in the Synod, neither those loyal to the regime, nor those who are true to Rome Bishops, of the underground Bishops are not to be discussed.  "I will tell you that our Church in China, especially the laity,  has shown the piety and uprightness of the early Christians since the beginning of 50 years of persecution."  The Bishop of Fengxiang continued with a view to the situation in the Church in other parts of the world: "I pray fervently and constantly to the almighty God, that our piety, our faithfulness, our persistence may heal the tepidity, the infidelity and worldliness, which is the situation of dissipating openness and freedom abroad.  In the year of faith you may be able to fathom why our faith in China has preserve red with such purity in your debates in the Synod.  It is as the great Chinese philosopher Lao Tse said:  "As disaster brings new flowering, thus disaster is hidden in tepidity.'  The Church outside of China is infected with inertia, infidelity and the secularization of the Faith even of many clergy.   In the Church in China, the laity are as pious as the clergy", said Bishop Li Jingfeng in his letter to the Synod.

Bishop Lucas Li Jinfeng has presided over the only Diocese in the Peoples' Republic of China for several years, which is the only Diocese associated to the underground Church loyal to Rome.  In 2004 Msgr. Li Jingfeng was officially recognized by the regime in a moment of relaxation of relations between Rome and Peking without signing the infamous act of submission and joining the regime's Bishops.  His Diocese has experienced several waves of persecution since then, in which priests were abducted, cloisters stormed and dissolved.  The last incarceration Bishop Li Jingfeng has suffered was in Autumn 2001.