“We sit by and watch the Barbarian, we tolerate him; in the long stretches of peace we are not afraid. We are tickled by his irreverence, his comic inversion of our old certitudes and our fixed creeds refreshes us; we laugh. But as we laugh we are watched by large and awful faces from beyond: and on these faces there is no smile.” — Hilaire Belloc, This That and the Other (1912) 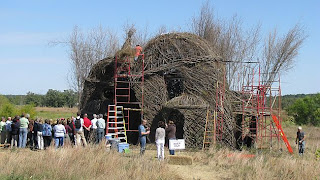 Edit:  The whole thing has an air of the Gnostic, legends of porcine craftsmen constructing dwellings, and of the lairs of fallen men who serve ancient and malevolent powers they fear but don't understand.  It's a tendency in public art to avoid representing anything, no battle, no spiritual triumph or even a mere scientific one, just a couple of disconnected inanimate objects whose purpose is to confuse you at best, at worst, lower your spiritual aspirations down to a purely material plane.

What do these rather amorphous and primitive structures have to do with Benedictine worship?   Perhaps a word from Catholic World Report's John Buescher can throw some light on these bizarre constructions, which reveal to our mind the gnostic associations of puritanism:


Nevertheless, there is a harder-edged answer to the question of the puppets’ purpose: If it is “Puritan,” why this explosion of celebratory paraphernalia in the puppets and costumes? It derives from the “apophatic” meaning of the puppets: as instruments in deconstructing traditional forms that stand between the individual and God. “Forms,” like “dogmas,” are, to the modern mind, idols, and must be taken down. The traditional form of the liturgy, thus, is the enemy of faith, and the puppets invade its sanctum, as agents of iconoclasm. In short, the puppets are intended as mockeries, speaking (mutely) truth to power (Silence = Death!), meant to pull down the temple in the name of the people, acting in the liberty of the free spirit. They are meant to unmask hypocrisy—regarded as the ancient tradition in its entirety.

Here's the article where it appeared from the above photo at 1240AM Radio:


COLLEGEVILLE – An unusual structure is going up this week at the entrance to St. John’s University.  Artist Patrick Dougherty is leading a project to build a series of five chapels made out of sticks, inspired by the campus.
He says he wants his artwork to be accessible to everyone.
Dougherty is spending a three week residency at the St. John’s Arboretum.  He says there are 10-15 people working on the sculpture each day.
Once it’s done, it will stand for about two years.
Dougherty works on about 10 of these types of projects each year all around the world