Kirchensteuer: The Diocese of Chur Breaks Away!

Edit: Bishop Huonder strikes a tremendous blow against the Liberals in his Diocese as he effectively cuts their means of support.  The official Swiss Church is dominated in its administration by Leftists, and they created many problems for Bishop Huonder's predecessor. 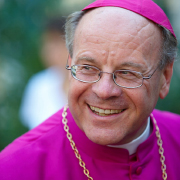 Bishop Huonder is very traditional friendly, often says the Mass of All Ages and is often identified as being a harsh reactionary and is attacked even by his own priests.

He has remained in his position however, and continues to close in on the Old Liberal apparachiks on his Diocese, showing as much magnanimity, intelligence and liberality, by cutting the rotten state church off at its knees.

A person can belong to the body of the Catholic Church without belonging to the state church body of the canton.

This decision was commented on by the press speaker of the Diocese of Church on the 14th of August.

His statement bore the title:  "The real Church does not demand steuer (tax) for membership".

Free Contributions instead of a Forced Tax

It offers the possibility to offer free contributions instead of Church-tax as an endowment of solidarity to the Diocese.

If a person decides to leave the State Church, it is not expected of him that he is distancing himself either from his Catholic Faith or the Church:

"Also in these circumstances he will not be threatened with refusal of the Sacraments."

Communion with Christ Instead of Church-steuer

The Diocese complained about the lack of transparency:

"Still many don't know that the Catholic Church as such demands no Kirchensteuer (tax) and that in almost all the other countries are unfamiliar with a system comparable to that of Switzerland."

Worldwide, 95% of all Catholics are free regarding donations and other obligations to support-- without a comparable steuersystem:

"In order to respect this freedom, there may also be no forced imposition between the steuersystem -- on the side of the "national church" or the Church community -- and complete communion with the Catholic Church."

This community isn't bound by a financial system, but on being bound with Jesus Christ.

Canon law actually speaks of material solidarity:  "The manner and means, how this is effected, remains however up to the discretion of the faithful."