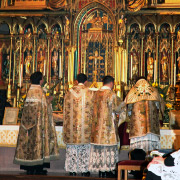 A close, close examination reveals:  not a single one of the new priests did himself enter into the absurd seminary in their home diocese.

(kreuz.net, Villingen) Last Sunday Father Francesco Riegger of the Priestly Society of St. Peter celebrated his first Mass in the Old Rite in the medieval Cathedral of Villingen-Schwenningen.

This was reported by the German lay community, 'pro-missa-tridentina.org'.

Father Rieggger grew up in Villingen.  The 80,000 population city of Villingen-Schwenningen is in south western Baden-Wurttemberg.  It belongs to the desolate Archdiocese of Freiburg.

The first Mass took the place of the usual Sunday Mass.

Father Jérôme Bücker of the Societhy of St. Peter explained the differences and similarities of the Mass of All Ages at the beginning of the Mass to 350 faithful.

In the traditional Rite Communion is received only on the tongue, explained Father.

The pastor at the Cathedral in Villingen is the Dean Josef Fischer.

He informed people during the greeting that he would shell out modern hand Communion in the clerestory.

This is forbidden in the Old Mass.

In Villingen-Schwenningen is the home of origin for nine new priests "almost unheard of any more" -- explained the site 'summorum-pontificum.de' this Friday.

Because in the last two years there were two home parish first Masses.

They're all refugees from the Diocese

Surely, none of the priests saying their first Masses (Primizianten) came from the Old Liberal seminary of Freiburg.

Fr. Simiganovschi and Fr. Kalisch belong to the Archdiocese of Vaduz.

They were ordained by the battle hardened Msgr Wolfgang Haas of Liechtenstein.