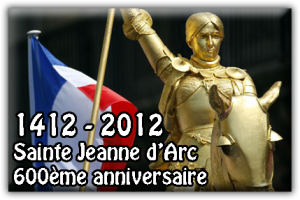 Edit: Usually, there's not much to add to what Rorate has done.  This time we have some overlap.

(Orleans)  More than a thousand pilgrims covering the second leg of their yearly international pilgrimage of tradition on foot.  On the occasion of the 600th birthday of St. Joan of Arc, rather than travelling from Chartres to Paris, they went from Chartres to Orleans.

Msgr Bernard Fellay, the General Superior of the Priestly Society of St. Pius X, celebrated a Pontifical High Mass for the Pilgrims at this feast beneath the open sky.  For the German speaking pilgrims he added personally a sermon in German to the content of the Mass.  In that, he drew a comparison between  the relationships which dominated the time of the Maid of Orleans and those of today.  Then as today "Chaos" dominated.

A young girl showed then what it meant to accept God's will and to do.  Also then to accept, when one might not understand in a human sense.  Humanly it is not apprensible, why God allowed that Joan was burned at the stake.  But God had even given up even His only Son for the salvation of man.  There had to be a savior of France, in order to mature the soul.  That's how it always is with the healing of the soul.  God accomplishes this for the salvation of souls.

For this reason, the faithful also now rely on divine providence and not according to human reckoning.  This also applies for the question of the recognition of the Society by the Holy See.  It means to throw yourself into trusting God's guidance and let go.  In this regard the Superior General re-emphasized, contrary to rumors,  that there is no document from Rome before him that must have a yes or a no.

On Pentecost Monday, the Pilgrims will end their last leg in Orleans, where the current international pilgrimage will conclude their 100 kilometer journey on foot with Holy Mass.