Blasphemy at Ale Mary's Continues: Diocese Pretends Not a Problem 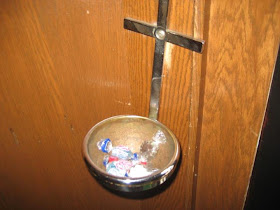 Edit First of all, we'd like to announce that there will be another protest against the blasphemy at Ale Mary's on the Sunday following the Feast of Corpus Christi, June 10th, in reparation for the outrages against Our Lord, His Church and ministers in the post-Catholic town of Baltimore.  A peaceful Rosary will be said and that is all.  We're also happy to report that the last Rosary vigil was a great success and we look forward to doing this as long as it takes the bar to go out of business or for the owner to come to his senses.

Nothing Justifies this Act of Blasphemy

Just: a couple of things on this situation.  There has been a lot of coverage and the Archdiocese even got involved, or at least someone who claimed to represent the Archdiocese in this matter.  Both the Archdiocese and the perpetrators claim there is a "certificate for sacred use".  We'd like to see that and in any case don't believe it exists.   Even if it did exist, it doesn't permit the owners to abuse and commit sacrilege, and it doesn't excuse Diocesan officials from trying to ignore the issue as they apparently have for a long time.

Diocesan Representative Intervenes and Says Nothing

We'll never tire of pointing out that whether or not these items are actually blessed is not important, but since the owners of the bar and certain individuals in the media are using a statement from Catherine Combier-Donovan to justify blasphemy, it's something which needs to be addressed.  Despite the fact that the Liberal run Diocesan newspaper made some stunningly interesting comments seemingly supportive of the blasphemy,  they  actually stopped short of giving an endorsement to "Ale Mary's".

Additionally, there are a few problems with what Ms. Combier-Donovan, the Diocesan representative,  is saying, however.  First of all, there is no ritual for "deconsecrating" objects that are consecrated as she suggests.

In fact, when she was contacted by phone, she demurred from saying what this "ritual" was.

The truth is, that Sacramental items should  be, according to Church law, either respectfully destroyed or buried.   Since her expertise is in modern Liturgy, perhaps she might not be aware of the importance of sacred objects, or any canons related to them.  Here is a citation for your edification, [Western Catholic Reporter], :

One local reporter named Amy Phillips [late forties], who is not only a self-proclaimed authority on catholicism, but an "Inappropriate Princess of Randomness",  went so far as to suggest that she understood that these items were important to Catholics, but go ahead and abuse them anyway, "it doesn't seem like a problem to me". Amy Phillips, who writes for the anti-Catholic 'Washington Times'  had a number of factual inaccuracies in her report as well, which ranged from the number of protesters who were ranged before the bar peacefully praying the rosary, to a description of the bar's owner, Tom Rivers, as "personable and friendly" and most egregiously of all that in her professional opinion that so much fun is being had at "Ale Mary's" bar, that there just can't possibly be anything wrong with it.

Even the Diocesan spokesperson, who is not qualified to judge the matter, did not give the endorsement the bar and its supporters seem to be looking for.  In the weaselly way of chancery employees who interact for the public, she was sure to attempt to cover herself when she wrote:

“Whether this is appropriate in a city where there is a large Catholic population may be not the best judgment,” Combier-Donovan said. “I think what happens is it’s shocking to people’s sensibilities. When it shocks, I’m not sure that’s a good thing.”


Take note that the spokesman is concerned about the largeness of the Catholic population.  Is the being of an object suddenly dependent on a 2/3rds majority?

It shouldn't matter whether there are a large number of Catholics in a city.  You'd hope that a chancery official herself would not be guilty of espousing heretical ideas related to epistemology.  Yes, empiricist rationalism was condemned by the Catholic Church and just because you're not aware of something real, doesn't mean it doesn't exist or that it doesn't have qualities contingent to it depending on its form and state.  In any case, an item's sanctity has nothing to do with how many people there are who believe it to be so.  It either is or isn't.

She assures us that things that shock are "bad", but then she doesn't explain what it is that's shocking or why we should be concerned if it is.  She is eager not to take a position one way or another.

Another concerning thing is that she says that there is some kind of ritual related to "desanctifying" objects.   Actually, there is no such thing.  She suggests also, confirming the bar owner's story that there is some kind of "certificate allowing secular use for a de-sanctified sacred object".   This is a complete fabrication on the part of this woman and the bar owner.  There is no such document.  There is no such ritual in the Catholic book of rituals, the rituale.  In any case, since the owner by his own admission purchases so many of these items on the internet, can we ask if he received such certificates for all of these items?

In truth, merely selling them, which in itself can be a sinful and sacrilegious act, apparently effects the desanctification, the sullying of the object concerned.

The problem of theft isn't something we here had been concerned with.  Although now that it's been brought up by the owner, it's not a ridiculous suggestion, since theft does happen, sadly, not infrequently.  Does he know that these e-bay items aren't stolen themselves?

Regardless of whether or not these items were purchased brand new, never having been blessed.  Even if they were sold legitimately, they would have to be purchased with the notion that they would be used respectfully.

Somehow, using them as common drinking mugs, candy dishes or vulgar deocrations with Mardis Gras beands draped around them in a kitchy and often vulgar atmosphere, doesn't sound like respectful, and stretches credulity when those who operate the bar say it is.

A Question of Tom Rivers' Character and Temperament

In fact, the owner of the bar, who has been accused by bar patrons of being disrespectful and anything but friendly in the past, has made bigoted comments about Catholics and others.

In fact, when he was addressed respectfully, he was been very nasty.  Mr. Rivers says that he's been physically threatened in e-mails.  Considering the untruthfulness of his claims to be respectful to Catholics, that also seems difficult to believe.  It might also be possible that some of the nastier of his bar patrons are calling him up to give truth to the lie, or perhaps there are others who dislike Tom Rivers for other reasons unrelated to his blasphemy of Catholic objects.  That seems more likely than that the belligerent and disrespectful Tom Rivers has been threatened by law abiding and peaceful Catholics who've only asked him to stop abusing these objects and disrespecting them.

Here's the interaction he had with someone who addressed him respectfully,  and even said nice things about his bar and posted it on her Catholic forum Fisheaters:

Hi, I'm writing to express my concern and sadness over your using Catholic sacred objects in a secular way. I don't know why it is that Catholic ritual items and themes are OK to use in this way, or why it's deemed okay to even ridicule Catholics in ways that no one would dream of ridiculing Jews or Muslims. While my guess is that you have no intent to insult Catholics, you likely have picked up on this "zeitgeist" and, without thinking, just went along with the style of aesthetics you've chosen for your restaurant (whose menu looks yummy, by the way!). I ask you, though, to please consider how you would expect Jews or Muslims to respond if their religion were used in this way, and why you chose Catholic imagery but not that of another religion, and how you would feel and think if someone were to do this to your religion (or, if you are Catholic, why you would do this to the Lord's Church). Seriously: why Catholics? From Madonna's early work to Nicky MInaj, from "Piss Christs" and dung-spackled Madonnas, from Jay Leno to Bill Maher, from sitcoms to Hollywood movies -- our society routinely picks on Catholics, holds us and our religion up for ridicule, abuses our liturgies and sacred symbols -- all while (rightfully)  never doing such things to Jews or Muslims, and even reacting defensively those few times it IS done to those religions. Why is this? Do you really think it's OK? And would you consider stoppping being a part of that sad trend?

With all due respect, and wishing you the love and peace of Christ,

Wow you really like to talk.. My god has a sense of humor.. Sorry yours is so closed minded. Have a nice day.

So does mine. So let's make fun of Jews and Muslims!

I'm not making fun of anyone. And it's has taken over 7 years for someone to start complaining . This has nothing to do with faith... This all started because some thin skinned homophobic girl got her patties in a bunch for calling her out on a lie. You shouldn't believe everything you read. Open your mind!! Think for yourself  !!

Why do you think I believe everything I read and need to "open my mind"? Because I'm religious?

Are you using ciboria, chalices and holy water fonts in your restaurant for anything other than the Eucharist, the Precious Blood,  and holy water?  If you are, then what is that I've read that I shouldn't believe?

It sounds like my mind is more open than yours because I think you should have your waitstaff wear Jewish kippot, tefillin, and prayer shawls, and you should have mezuzah holding flowers on each side of your door! And play the Muslim call to prayer once an hour or so, or maybe call a particularly filling menu item "The Jihad" -- and reward the eating of it with a T-shirt bearing the likeness of the Prophet Muhammad (pbuh)!  Come on, man, open your mind!

It may have taken over 7 years for someone to start complaining because, like I said, it's par for the course to make fun of Catholics and Catholicism. That's likely so because we're not known to drive planes into establishments that offend us, or call Abe Foxman or the SPLC to get lawsuits going, charge people with hate crimes, and close restaurants down by yelling something comparable to "antisemite."  Instead we write letters, asking nicely, and get accused of needing to "open our minds," of being types who have no sense of humor, and of being people who are so stupid we believe everything we read.  Guess we're taking the wrong tactics with stuff like this.Alas.

Opinions are like assholes everyone has one!!! I just keep mine to myself. I didn't  ask to see yours, but you seen to like sticking it in peoples faces. Put on some pants. Gods speed


Quote
Cute, huh? He doesn't answer any of my questions, doesn't take my and other Catholics' concerns seriously, insults Catholics when we complain we're being insulted, and -- the kicker -- is apparently a major pussy who only ridicules people who he knows won't fight back.  He seems to be too chicken to do to Muslims and Jews what he does to us. And WE KNOW IT. And so does anyone reading this.