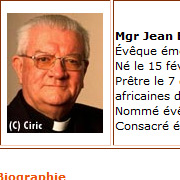 Edit: This Prior seems bent on joining the local Diocese and leaving the SSPX.  Things may become clearer.


It appears as though the Society of St. Pius X Prior wants to turn to the local Diocese.   The opportunity has clearly been concluded.

(kreuz.net) Last Sunday morning Msgr Jean-Marie Bonfils (82) of Ajaccio on the Island of Corsica  has made an unusual gesture.

'Riposte-catholicque.fr' reported this on Monday.

The Diocesan Bishop is Confirming at the St. Pius X Priory


The Bishop was at the church of the Society of St. Pius X in Ajaccio.

There he confirmed 19 candidates in the Immemorial Rite.  At the end he celebrated a Pontifical High Mass.

The Bishop has clearly held the confirmation at the priory of his own initiative.


Msgr Bonfils was ordained as a priest for the ‘Societé des Missions Africaines’ in December of 1954.

He was an instructor in Lyon and in Benin, West Africa, as a theology professor.

In March 2005 Msgr Bonfils retired as Bishop to Nizza.

In September 2011, he was named as the Apstolic Administrator of the crisis-stricken Diocese of Ajaccio on the isle of Corsica.

He will conduct the business of Administrator till April 14.

Then his successor, Msgr Olivier de Germay (51) will be consecrated as Bishop.

Presently, Msgr Bonfils is also the Papal Commissar for the Contemplative Sisters of St. John and also the de facto General Superior.


The action of Msgr Bonfils appears to have been done in conjunction with Father Herve Mercury -- the Society Prior of Ajaccio.

He is presently in consultation with Msgr Bonfils to become incadinated in the Diocese.

The most recent confirmation in Ajaccio was not the result of an arrangement with the General Council of the Society.