Edit: Just received a message from one of the readers. It looks like "Father Guestmaster" has announced that the retreat is cancelled. This is a good time for an analogy.  Sometimes you can apply topical ointment to a festering patch of skin, or give pain killers, but those things won't necessarily address the underlying condition.

Also read the article on the Pine Curtain and he says that the Monastery still hasn't taken down its advert on its "guesthouse" page.

The modernist monastery has not yet taken down the offending pages and the presenter of the retreat still has the affair up on his site, here. 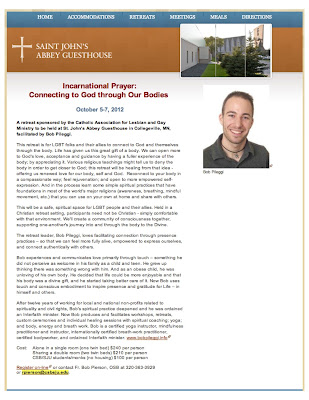 At the present, the offending entry can still be seen here.  Yet it's entirely possible, considering the track record of the institution, that they'll have the retreat anyway.

This is too little too late, as they've been doing this sort of thing for years.

Thanks to 'Rorate Caeli 'for getting the word out in an unambiguous and sensible way, and anyone else who was angered enough by this travesty to help spread the word about this place which is sorely in need of an exorcism, or an interdict.

The monk Fr Bob Pierson who was the contact person for this retreat is also Tresurer for the sponsoring organization "Catholic Association of Lesbian and Gay Ministry" and almost all the other board members of this group can be verified online to be involved in other organizations explicitly in favor of homosexual "marriage"; at least one board member (an "inferfaith minister") performs same sex ceremonies. Based on web searching, the retreat leader Bob Pileggi is apparently a fallen away Catholic, has been a staff member of the pro-gay-marriage "Lambda Legal Defense Fund" for outreach and as coordinator of "The Marriage Project", and he also offers his services as an interfaith minister conducting custom weddings and other ceremonies clearly including same sex "weddings".

The attached pdf stated that Bob Pileggi is also a practioner of yoga, breath work, and minfullness practioner. Perhaps he should take this retreat to the MN Zen Center. He also states that this will be a chance for GLBT folks and their "allies" to come together. What exactly is a GLBT "ally? If I had to guess, it is probably an overweight woman who hangs out with gay men.