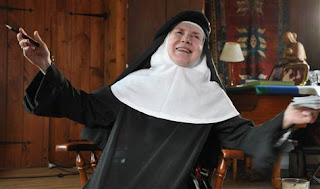 Edit:  She looks terribly refined in that garment, a sign of contradiction.   The secret is that there is an entire universe in the cloister, a beautiful halo of stars about the house at night and incredible wonders in a life lived with childlike purity.


Perhaps sister will inspire more young women to evaluate their course in life and embark on an adventure most men would be too timorous to undertake themselves.


Of course, the habit works on a lot of different levels, there's a level of wonder and a reflection on what it means, it's a prayer.
If you plan to watch the Oscars this Sunday, keep your eye out for Dolores Hart, the 1960s starlet who starred opposite Montgomery Clift, Robert Wagner, and Elvis Presley — twice.
She’ll be easy to spot: just look for the cheerful-looking woman in the nun’s habit. That’s because Hart, who famously shared one of Presley's first on-screen kisses, is now Mother Prioress Dolores, Benedictine nun. Her unusual life story, from the glitz of Tinseltown to a cloistered convent in Connecticut, where she now lives, is the topic of a new HBO documentary, “God Is The Bigger Elvis.”
Hart, now 73, grew up in Chicago and got her start in acting at the age of 19 locking lips with Elvis as one of his love interests in the 1957 movie, "Loving You." She went on to star in a series of high-profile movies and Broadway productions, and was nominated for a Tony Award in in 1959. She also got engaged to Don Robinson, a Los Angeles architect.

The article you linkd to is one of the first I've read that actually refers to her role as Sister Clare in a very good 1961 film called FRANCIS OF ASSISI. Most other articles ignore that for some obscure reason.

I must say, however, that if she was quoted accurately, I am quite disappointed in her comments about the current sex-crazed - I would say deranged - films coming out of Hollywood. It hurt me terrible to read what she said.