Berlin's Archbishop Woelki For Dialogue With the SSPX

Edit: this is the first that it's clear that the Society is expected, at least according to Archbishop Woelki, to accept the Second Vatican Council completely. It's also important to note that the Society continues to distance itself from and isolate Bishop Williamson.

The leadership continues to hold out hope for the "conservative" leadership of the Church.


Deutschlandradio Kulture interviewed Berlin's Archbishop Woelki about a relationship with the SSPX.  Here is an excerpt from the interview. 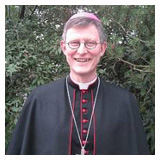 D-Radio:   But to whom is this rejection directed -- perhaps even to a Pope, who still directed a reconciliation with the Ultra-orthodox Society of St. Pius X, even though aware a member was a holocaust denier? [This again...]

Woelki:  For that reason, I believe the Pope has performed a very importance service.  His task consists precisely in forming reconciliation and unity, and in fact it comes straight from his office and in Tradition, which is also that of Taizé.  So it is not enough now to just close a group out, rather we stress here also the political arena is just as important as dialogue, to get to know people, and only then, when one speaks to another, can one integrate and then reconcile.  And I think that this is the important mission of this Papal office, to stand for the unity of the Church and seek this unity of the Church.

D-Radio:  But isn't it difficult to communicate and integrate this group of all things?

Woelki:  I don't know.  Therefore I think one doesn't know about this group ... It is surely a difficult group, it is not my group and one has to be very careful to maintain that now all, who belong to this group, are holocaust deniers or even belong to radical right bodies of thought.  There is in fact one of these, completely  insensible and irrational men, who did this, and so far as I know, the other so-called Bishops, who are also not approved by us,  by the Catholic Church,  have even distanced themselves from this man.

Commentary from SSPX German District:  HE Bishop Woelki here represents the represents the course of most conservative Church leaders: In contrast to the enemies of the Society, they do not throw all the Bishops and priests in the Williamson-bag and recognize that the Priestly Society of St. Pius X has nothing to do with right--wing ideologies.

Because the current course is now set in Rome is on reconciliation and brotherhood,  the discussions with the Society will continue.

The Society of St. Pius X is regarded in this way as a mule, who has simply not yet understood that the Council "as a whole" has to be accepted.

This approach completely bypasses the problem of course:  The Catholic Church is in complete collapse 50 years after the Council.  You must pray for Msgr Woelki and all the other more or less conservative bishops that they come to appreciate at last this context:  the reason for the massive apostasy is the Council, at least those portions  that the progressives exploit with their new theology of the equality of all religions,  to prey on the Church.   This is how the Church has lost its purpose and consciousness of mission, and in consequence the loss of Holy Mass (replaced by a community meal) and therefore also vocations.

So long as the bishops do not recognize the crisis in the Church and their causes, there will remain a dialogue, which completely misses the point.