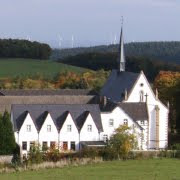 The Old Liberal General Director of the Trappist Order in Rome wants the Abbot of Mariawald replaced -- and has fallen on his nose.

(kreuz.net) In 2008 the German Trappist Abbey of Mariawald in Eifel rd the privilege to celebrate the Liturgy and discipline of the Use of Monte Cistello of the year 1964.

The Commission 'Ecclesia Dei' published the Papal decree, after which employees of the State Secretariat had attempted to make the papal decision disappear in a drawer.

Abbot Dom Josef of Mariawald got such a free hand in his monastery, to reinstate the traditional rites and customs without having had to find democratic majorities.

One third of the convention was for all of it, a third neutral and a third completely against.

Moreover, it was hoped to give a new thrust to new vocations for the Monstery.

However, when a handful of postulants could not meet the strenuous Trappist life - which is normal in such monasteries - and thus it happened that with no immediate flowering, those enemies of the Roman Rite within the order came on the scene.

The Abbot sits firmly in the saddle

So this was how the abbot of Maria Wald was sidelined by the advisory board.

This, however, quickly lost its teeth, because the Abbot is a wise and strong personality and he doesn't pretend to see things as they aren't.

Thus attempted an impeachment on the Order level.

An abbot, however, can be dismissed only for canonical reasons and has the right to appeal if necessary to a papal court.

Since Abbot Joseph has survived the critical month of September, in which he dealt with the General Council having survived politically, it has become clear that his position is not debatable and he will stay permanently.

The term of office for this reformer Abbot will last until 2038.

Only helps the Trappist prayer

In between 1965 and 1975, the Trappists lost thousands of monks and nuns because of rampant old liberalism.

Nevertheless, the relatively strict Trappist order still has twice as many vocations as members of the milder Cistercian order.

Mariawald has threatened to flip over into a Buddhist meditation center in the past.

At that time the Monastery was still on friendly terms with the Bishop of Aachen, Heinrich Mussinghoff.

Mariawald is located in the Diocese of Aachen.

Resignations, deaths and missing entries diluted an abbey which once had one hundred monks, more and more.

There was at the same time the heroic sanctity of so many brothers, who were mainly working animals, who endured the suffering and the situation in a spirit of prayer and vicarious atonement.

Brother Famian Gerwing who died in February was one of them.

Since the silent monks of Mariawald have begun this year to keep silent for half an hour daily prayer before the Blessed Sacrament, they have again reported serious candidates for the contemplative religious life.