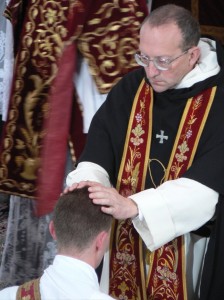 The General Chapter of the Traditional Franternity of Saint Vincent de Ferrer better known in France as Fraternité Saint-Vincent-Ferrier (FSVF) has selected a new General Superior, Father Dominique-Marie of Saint de Larunerfor to lead the Catholic order for the next six years.  Cardinal William Levada, President of the Papal Commission Ecclesia Dei confirmed the election which took place ten days before on the 23rd of September 2011.

The new General Superior P. Doninique-Marie de Saint Laumer was born in 1957.  He has belonged to the Order of St. Vincent Ferrer since its founding in 1979.  He received the priestly orders in 1988.  From now on he will bear the office of Prior.

The Fraternity of Saint Vincent Ferrer is a traditional society of the Catholic Church.  Its spirituality is founded in the Dominican order,  which is why its membership is known as "Old Dominicans".  The community is therefore isn't a  part of the Dominican Ordo Praedicatorum, but in view of its particular orders, which were founded in 1979 by French priest Louis-Marie de Blignières.  The Fraternity was canonically erected and recognized in 1988 through the Papal Commision of Ecclesia Dei as an Institute of Papal Right.

The traditional Order prays the Dominican Liturgy in the Extraordinary Form of the Roman Rite according to the Missal of 1962.  Father Dominique-Marie de Saint Laumer is the second General Superior of the Community, of which Pater Louis-Marie de Blignières has been director since its founding.

The location of the Community is the Cloister of Saint Thomas Aquinas in Chémeré-le-Roi, France.  Since 2007, it counts fifteen members, of whom seven are priests.  They also produce a theological publication, "Sedes Sapientiae" also distributed by the Fraternity.

The founder and General Superior Louis-Marie de Blignières till now, came originally from Sedevacantism,  which left the Catholic Church in to form a schismatic group following the Second Vatican Council at the end of the 60s.

In 1981 the first members renounced their orders. The Community gave up their sedevacantist position and approached the Catholic Church again. 1986 saw the official reconciliation with Rome. In 1988, the official act was to return to full communion with the Church through the recognition of the community and its canonical erection by  the Church. The members of the Order were thus allowed to study at pontifical universities and colleges. The community operates its own website: www.chemere.org