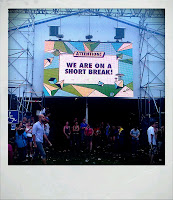 Edit: Participants claimed to have experienced the "end of the world" at a rock festival on Thursday.  There were 65,000 on the field and it's a testimony to the mercy of almighty God that more weren't killed.

The storm came from nowhere and ripped apart two of the stages while the skies above became as black as the soul of a money lender.  Heavy gusts of wind set in and torrents of rain.

The promoters decided not to continue the event scheduled to last for three days.

"I have bruises all over.  Trees fell down. It was the end of the world" -- explained an eye witness for the Belgian journal "Le Soir"

There was a palpable curse at the beginning of  the event last year.

The singer of the no longer existing British electro-pop group, "Ou Est le Swimming Pool", Charles Haddon, killed himself after his entrance.
He hung himself from a satellite mast in the parking lot. On the day before the sound engineer of another group suffered a heart attack.

The evil festival was planned by an obscure atheistic organization "Humanistic Youth" from the 14,500 person city Leopoldsburg in the vicinity of Hasselt.

It is a society which is devoted to promoting church-hate.

One of the more well-received groups is, for example, "Faith No More".