TFP Marches in Defense of Marriage Rally in Da Bronx 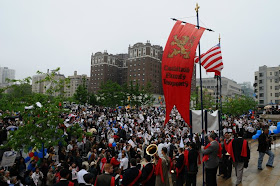 Editor: The TFP was invited to help at the Defense of Marriage March in the Bronx, New York by Senator Diaz.  There were many Cristeros present and the numbers were swelled somewhere between five to ten thousand.  Naturally, the decadent media ignored the presence of the Society for Tradition, Family and Private Property.

Don't be afraid. Stand up and tell the truth about marriage and listen to Mr. Brown.  They've told kindergarten children that their parents are bigots for believing marriage is between a man and a woman, closed down Christian adoption agencies and threatened those who oppose them.  In any event, someone should tell Mr. Brown that the problems were intensified by the Civil Rights Movement, but it was a moving speech all the same, but they need to understand that some of the principles they embrace actually undermine their positive support for marriage.