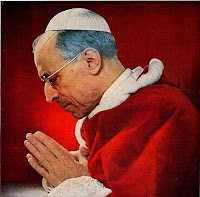 As soon as Italian dictator Benito Mussolini was ousted from power on July 25, 1943, Adolf Hitler began hatching a plan to kidnap Pope Pius XII and plunder the Vatican. Clearly, the Fuehrer thought, the "Jew-loving" pope had encouraged King Victor Emanuel II and some rival fascist leaders to overthrow his Italian puppet.

The following day Hitler called for an urgent meeting of his military leaders. They must liberate Mussolini and return him to power, he cried. And "we must occupy Rome" and "destroy the Vatican's power, capture the pope, and say that we are protecting him." The pope might even have to be killed.

About six weeks later, on September 13, SS General Karl Wolff, the SS commander in Italy, received a phone call from his boss, SS Chief Heinrich Himmler, orchestrator of the Holocaust. Himmler, Wolff told me, bellowed that the Fuehrer wanted to see him urgently.

Top image of Pius XII at prayer is from, A Catholic Life.
Posted by Tancred at 9:17 AM

I’ve been looking through your blog over the past few days and I found your blog to be very interesting.

Your Postings are really exceptional. I love your blog because of its unique content and valuable information. It is an example of perfect blog. I m impressed as well as inspired by your blog.

I have added your link in my blog http://denbarblog.blogspot.com/ under "Worth a click!" Section, so that my blog visitors could also enjoy reading through your blog.

Kindly visit my blog. And if you like my blog, please link back. I would be glad if my blog is referred by wonderful blog like yours.

Thanks for your time.

Waiting for a positive response.