Combat in Ivory Coast: Christians Are Being Annihilated

The outgoing, officially Christian, president doesn't want to give up his office, his supporters are engaged in battle against the supporters of the new Muslim president -- what looks like a civil war situation: 40,000 people seek protection in churches.

Abidjan (kath.net/idea) In the appearances of civil unrest in the West African country of Ivory Coast, Christians are being annihilated. They have been attacked by Islamic extremists; a number of churches have been burned down, according to the President of the US-branch of the relief organization Open Doors, Carl Moeller (Santa Ana/State of California) to the information service of Mission Network News.

According to reports from Church workers in the Ivory Coast there have also been Christians murdered. About 40,000 people are seeking asylum in churches to escape the unrest in the city of Abidjan.

The harbour city is a center of the fighting between supporters of the President-elect Laurent Gbagbo and of the internationally supported Alassane Outtara, who had been declared the winner.

Ggagbo refuses to recognize his electoral defeat and is holding tightly to his office. He identifies himself as a Christian, while Ouattara is a Muslim.

In the fighting between the supporters of both camps, more than 400 people have been killed. UN estimates the number of refugees within the country have climbed to 300,000. Around 100,000 are on the other side of the boarder having fled Liberia. The Federal Government has increased its foreign aid by 500,000.

About 20 million inhabitants are Muslims with about 38 percent as the strongest group. 27.5 percent are Christians, of which 22 percent are Catholics and 5.5 percent are protestants. The remaining citizens are mostly members of various native religions. 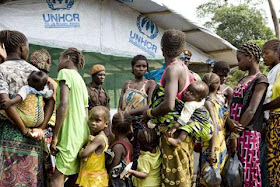 Ivory Coast, Getting out Alive.
Tancred at 1:20 AM
Share