This goes well with the week of prayer for the unity of Christians.  In any case this "fairy" would like to be known as "Herr Pastor".


(kreuz.net) January  24 2011 - The married protestant pastor, Hans Gerd Spörkel (54) told the world through the boulevard magazine 'Bild', that he was "born in the wrong body".

Spörkel is active in the 5000 population town of Haldern -- a part of the city of Rees in the district of Dusseldorf.

The evangelical community  has about 1250  people.

'Bild' formulated the problem in a humorous light: "Pastor Hans-Gerd Spörkel (54) was earlier a man and enters now as a woman before the community."

Even as a young boy Spörkel cried in front of the television when he watched the film "Sissi":


"He cried from joy, because he found the glistening clothes of the Empress so beautiful" -- 'Bild" said of the schmaltzy Sissi-film and Spörkel.

Since the beginning of last month the pastor has been taking feminine hormones.

He pulls the hair of his beard out, wears makeup and wears woman's clothes -- naturally from the protestant pulpit.

His decadent community clapped for a long while as he danced into his house of worship for the first time as a woman.

Spörkel's been active there for  26 years.

Before his most recent step, there were "rumors" in his community, where he was seen wearing women's clothing.

Finally, he had understandable thoughts of killing himself, suffered a nervous breakdown and entered into a "psychosomatic" clinic.

There he turned himself around and came to consider himself as a "woman".

Spörkel is separated from his wife.  According to reports from 'Bild' he will continue being there for his children. 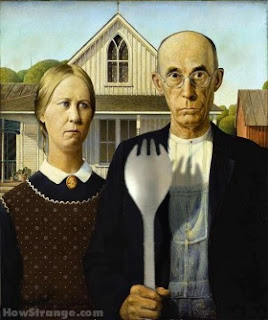 As you would expect he is supported in his madness by the protestant church leadership.

His boss is Dieter Schutte (61) who is the Superintendant of the communities of Wesel.

'Bild' cites him: "It was important to handle this transparently.  We have spoken with him intensively and paid close attention to how the community would handle his decision."

In the mean time Spörkel is stepping out, according to 'Bild', as a fairy:  "blue, rimless glasses, elegant makeup, blonde, short hair, two earrings, purple scarf."

He still wants to be addressed as "Herr Pastor".

"I still want to retain the masculine title for identification -- perhaps I will change it sometime," was how 'Bild' cited the disturbed man.